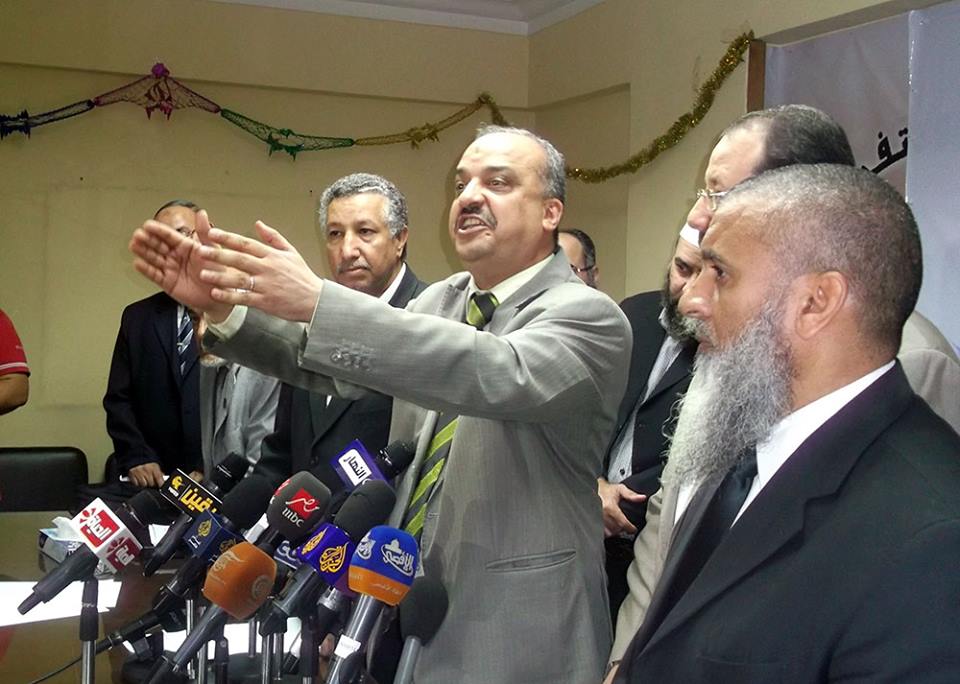 Islamist parties called for a million man march in front of Rabaa Al-Adaweya mosque in Nasr City on Friday 21 June under the slogan “No to violence”.

Several Islamist political parties, including the Freedom and Justice, Al-Watan, Building and Development, New Labour, and Al-Wasat parties, attended the press conference on Wednesday to call for protests rejecting violence.

The call came amid fears of clashes between supporters of President Mohamed Morsi and anti-regime protesters on 30 June.

The Tamarod movement, a petition campaign gathering signatures to withdraw confidence in President Morsi and calling for early presidential elections, had called for protests on 30 June, the first anniversary of Morsi’s presidency.

The campaign announced in May it had gathered more than 7.5 million signatures.

“If there were 20 million signatures against Morsi, they should be directed to parliamentary elections to form a majority at the House of Representatives” said Mohamed Al-Beltagy, leading figure within the FJP and the Muslim Brotherhood.

He added that it was of extreme importance that the president calls for early parliamentary elections.

“Al-Azhar had presented a document for renouncing violence and political parties signed it; now it is time to activate it,” Al-Beltagy said.

He also called on all parties to adhere to protesting peacefully and avoiding clashes and violence.

He stated that the president can only be removed for committing treason.

The New Labour figure added that Tamarod signatures had no legal value, but they can be used as a tool for political pressure during parliamentary elections. Al-Wasat Chairman Aboul Ela Mady, on the other hand, said the signatures can only have value if they were registered at the notary.

“We have evidence that Tamarod are planning to use violence during the protests,” Mady claimed.

“Those parties challenging the president’s legitimacy could not agree on one candidate during presidential elections,” said Kamel Abdel Gawad, member of the supreme committee of the Salafi Al-Watan Party.

He added that those calling for protests did not have a plan for what happens after 30 June, and when they were asked, Abdel Gawad said, they stated they would prepare a plan within 10 days from 30 June.

“Is this the attitude of the people we would trust to lead the country?” Abdel Gawad said.

Building and Development Party Chairman Nasr Abdel Salam said social problems should not be used to challenge the president’s legitimacy. “We should remove the political cover of anyone who does that.”

Mahmoud Hussein, secretary general of the FJP, stated that protests are allowed within two conditions: “peaceful nature of protests and not imposing opinions on people.”

The Islamist leaders stated that they will organise events and protests from 28 June until 30 June, but they did not yet agree on the details.