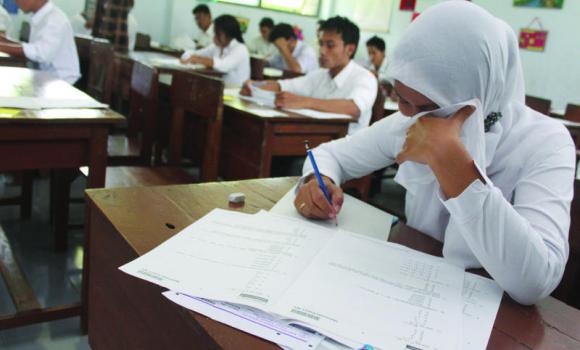 Use of new mobile phone apps such as Rivet, in addition to old techniques such as writing on rulers, walls, uploading documents onto calculators, or young girls placing such documents within their hijab, are some of the techniques that students have come to employ in order to help them engage in cheating on school exams. Some students spoke of using mobile phone apps such as WhatsApp and Viber, to move and transfer pictures and documents to one another via social media websites.

Some students have taken to creating internet websites detailing and instructing students on ways to engage in cheating on tests and exams, such as “Everything exists within our minds, except that which we use to cheat”, in addition to, “High School Vans”, which recently became famous as a source for leaked exams being made available hours before students were set to take them. Experts have called for preventative measures to be taken to stop students from using technology during test taking.

Talaat Amr, chairman of the Scientific Society for Telecom Engineers (SSTE), stated that technology is a double-edged sword, with both positive and negative advantages, and what is important is the way in which such technology is used.

He called for awareness campaigns to be launched for the benefit of students, informing them of the positive potential of mobile phone applications and new technology, also emphasising the need for families to cut back on their consumption of various forms of technology.

Yahiya Tharwat, director of IT consulting company Link Egypt, stated that the problem lies in the ways in which test questions are organised and presented, in addition to structural flaws in the education system itself, which he said needed to be changed. Such reforms would help curb cheating and test fraud, he said.

Tharwat added that the solution to the problem lied in the ways in which children were raised and the need to promote positive value systems within society. He said that young people should be educated about the positive aspects of using such technology, rejecting claims that students should have their phones taken from them either temporarily or permanently, saying that they should not be treated as criminals.

He went on to say that the lack of a strong moral foundation in addition to the exploitation of technology for the wrong purposes was the primary cause of test fraud. He went on to describe additional forms of cheating and test fraud he had previously encountered, including students opening up Bluetooth during class, in order to chat with individuals outside of class who are capable of going online and providing them with answers to specific questions.