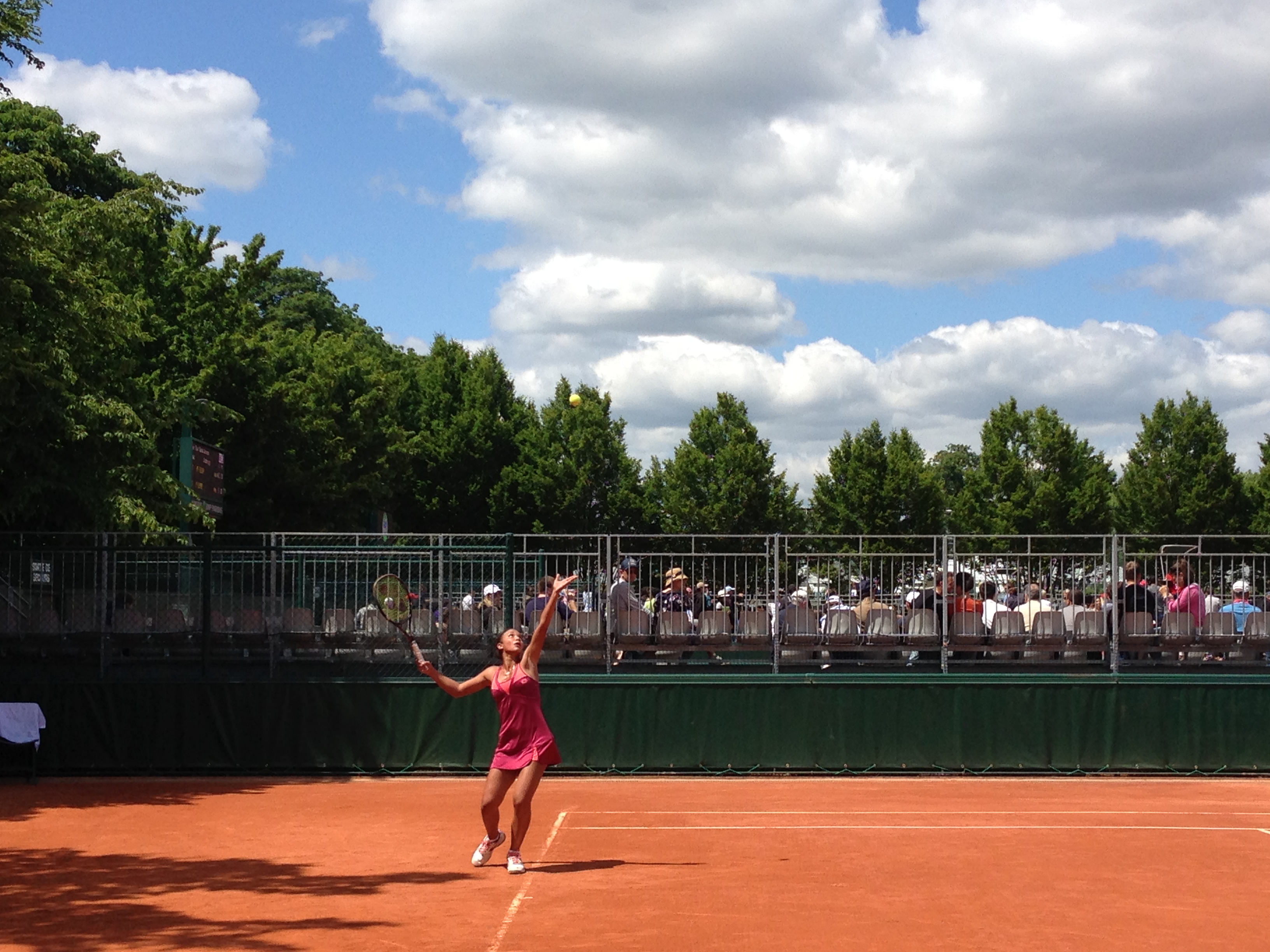 The last time Egypt had a Grand Slam champion was in 1964 when a 16-year-old Ismail El Shafei won the Boys’ Singles title at Wimbledon as a junior.

El Shafei would go on to become the country’s highest-ranked player and the only one to crack the top 40 in the world rankings. Since then, Egypt has seen no top-100 players on either the women’s or men’s tennis circuits.

Last week at Roland Garros in Paris, however, there were signs that we might finally witness an Egyptian tennis champion in the near future.

On Court 14 at Stade de Roland Garros, only a few feet behind the magnificent Court Suzanne Lenglen where eventual finalist David Ferrer was playing his fourth round, Egypt’s Sandra Samir battled for three grueling hours to win her first round in the girls’ singles tournament.

The next day, the 15-year-old won her first round in doubles.

For a teenager making her debut at the prestigious Roland Garros, Samir certainly left an impression, as she hit one huge groundstroke after another, showcasing aggressive style and intelligent tactics that implied she was mature beyond her age.

Hampered by a shoulder injury, Samir lost in three tight sets in the second round, but she later said Paris has not seen the last of her yet.

“I still have three more years to come back here as a junior; this was my first Roland Garros,” Samir said in the French capital.

“It was an amazing experience. My dreams are way beyond winning the Roland Garros junior title, but of course winning it would be a great thing. It would be a big step for me moving forward.”

Two weeks earlier, Samir was taking her I’dadiya exams for both the first and second terms on the same day since she missed the first term tests while playing the Australian Open – the opening Grand Slam of the season. She made the second round there too.

Samir also helped Egypt secure promotion from Group III to Group II in the Fed Cup for the first time in the country’s history.

Since last October, Samir has won three African titles – in 16 and under and 18 and under tournaments – which saw her peak at 37 in the world junior rankings. However her Grand Slam performances have forced the International Tennis Federation (ITF) to take notice and choose her to join their touring team which includes only a handful of handpicked players from developing countries. She was picked in previous years as well in different age groups.

This year, the ITF Touring Team provides Samir with the unique opportunity to play a series of tournaments, including Roland Garros and Wimbledon, over an eight-week period where she will face the toughest girls on the tennis circuit.

“I’m following very much what Sandra is doing and we’re trying to really help her,” says Frank Couraud, the Development Projects Administrator at the ITF.

“She had a big win at Roland Garros. That was a very important win for her because her opponent is ranked 20 in the world and she’s born in 1997, the same year as her, and Sandra beat her in three sets.

“So I’m very, very pleased. And I think Sandra has the potential to be a champion. I do believe that because you see when she’s on court, she knows what she wants. She absolutely showed a lot of maturity. I hope she continues. She’s definitely a fighter and she’s got the physical ability as well.

“She really wants it and I think this is something you can’t give to a player, you have it inside or you don’t. I think she’s got a chance to follow Ons Jabeur or maybe do even better than her.”

Ons Jabeur is an 18-year-old Tunisian who won the Roland Garros junior title in 2011 to become the first ever Arab woman to win a Grand Slam trophy.

Samir hopes she can follow suit and go even beyond that.

Currently competing on the junior circuit that includes players between 13 and 18 years old, Samir plans on moving up to the women’s tour after Wimbledon. She is eager to a taste of what it’s like on the professional circuit; where the players are older and significantly stronger.

“By the end of the year I hope that I’m in the top 10 in the ITF junior rankings, and top 300 or 400 in the WTA [senior rankings],” says Samir, who is coached in Cairo by Khaled Farouk and sometimes trains in California at Mahmoud Karim’s academy.

“I will start playing on the women’s circuit. I will be starting from scratch, I have to forget all about my success in juniors and build something new on the women’s tour. It will be tough but I need to start now and if you want to do it you will do it.

“Entering that world as a 15-year-old of course is tough. But I believe I can do it. I go online and download fitness programmes and I’m willing to put in the work to prepare myself physically.”

One of Samir’s virtues that stood out the most in Paris was her mental toughness, which in tennis can be worth far more than technique or power. She credits her father for helping her build that edge by allowing her to travel with the 14 and under ITF Touring Team.

“When I was 13, I travelled alone for two months, washing my own clothes, packing my own bags, preparing my gear, getting my racquets strung, taking care of myself,” explains Samir. “I have to give credit to my dad who wanted me to get that experience early on. Thanks to him, I am mentally stronger than many players I face. Of course I break down sometimes, but I manage to recover and refocus during the match.

“My mother is also always there for me. She knows exactly what to say to me. Mentally she plays a big factor. She always analyses my psyche the right way. She wouldn’t go technical, but emotionally, she knows how to stabilise me.”

With the proper financial support that can ensure Samir gets the proper coaching and funds to travel to tournaments, she can truly go all the way and become Egypt’s first ever top 100 female player. The question is, will sponsors take notice and help her continue her path? Time will tell.

She’s heading to Wimbledon in a few weeks, where she will surely turn some heads. Egypt had better be watching.

Suzanne Lenglen: a powerful female tennis player that lives on