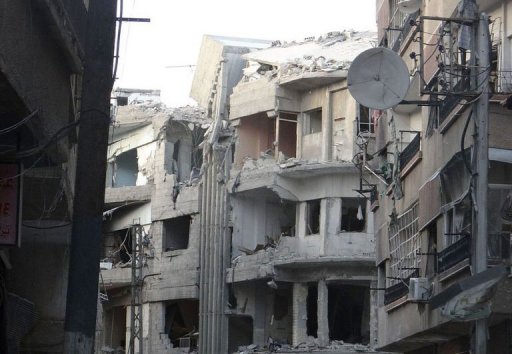 By Jo Biddle and Cecile Feuillatre (AFP) – The advance of Syrian regime forces on opposition strongholds has thrust into the spotlight a fractious debate on whether Western nations should arm the rebels, with no decision yet in sight.

British Foreign Secretary William Hague met in Washington on Wednesday with US Secretary of State John Kerry and made a passionate plea for Europe, the US and its allies to do more for “the innocent victims of war and repression.”

“The United Kingdom believes that the situation demands a strong, coordinated, and determined approach by the UK, the US and our allies in Europe and the region,” Hague told a joint press conference.

But he and Kerry acknowledged that, despite months of debate, their governments still had nothing new to announce.

Opposition leaders have urged the United States — manufacturer of some of the world’s most powerful weapons — to end its insistence on providing only non-lethal aid such as communications equipment and night-vision goggles.

Weapons have been pouring into Syria from nations sympathetic to the rebels such as Qatar and Saudi Arabia as well as from countries like Iran and Russia, accused of aiding President Bashar al-Assad’s regime.

And the US has been wary of adding more fuel to an already volatile mix, and fearful of sophisticated weaponry falling into extremist hands.

But with the conflict now in its third year and the balance of power on the ground shifting, the rebels say they are outgunned by Assad’s heavily-armed forces, and are going up against regime tanks with little more than AK47s.

The surprise fall of Qusayr to regime forces backed by thousands of Hezbollah militants has given new urgency to the debate, with Syrian troops now targeting the country’s second city Aleppo.

Hague said Assad “seems to be preparing new assaults, endangering the lives and safety of hundreds of Syrians who are already in desperate need.”

And he warned that while diplomatic efforts were focused on achieving a political transition, “we will have to be prepared to do more to save lives, to pressure the Assad regime to negotiate seriously and to prevent the growth of extremism and terrorism if diplomatic efforts are going to succeed.”

France on Wednesday urged the international community to help halt the regime’s advance.

“We must stop this progression before Aleppo. It is the next target of Hezbollah and of the Iranians,” French Foreign Minister Laurent Fabius said.

“We need to rebalance things because over the past few weeks the troops of Bashar al-Assad and especially Hezbollah and the Iranians, along with Russian arms, have gained considerable ground.”

Amid growing fears Assad may also have unleashed chemical weapons, Kerry said the US administration was meeting “to talk about various balances in this issue right now.”

US officials have said that “all options” except sending in troops are on the table as the debate on how best to help the rebels gathers steam.

Assad’s choice of weapons “challenges anybody’s standards of human behavior and we’re going to have to make judgments ourselves about how we’re going to be able to help the opposition deal with that,” Kerry said.

“People are talking about what further options might be exercised here… but we don’t have anything to announce at this moment.”

But, asked if he still believed the rebels could win, Kerry replied: “Nobody wins in Syria the way things are going. The people lose and Syria as a country loses.”

Amid the frantic diplomatic efforts, Syria is also likely to dominate next week’s G8 summit to be held in Northern Ireland.

On Tuesday, France’s foreign ministry warned the conflict, in which an estimated 94,000 people have died, was at a “turning point”.

“What should we do under these conditions to reinforce the opposition armed forces? We have had these discussions with our partners, with the Americans, the Saudis, the Turks, many others,” said ministry spokesman Philippe Lalliot.

“We cannot leave the opposition in the current state.”

The European Union, under pressure from London and Paris, last month failed to renew an arms embargo on Syria, leaving individual member states free from August 1 to supply weapons to the opposition if they decide to do so.

Fabius said France had not yet decided what to do after the deadline.

Meanwhile, nations backing the Syrian opposition are due to hold talks meet Saturday with the military chief of the rebel forces, Salim Idriss, in Turkey.