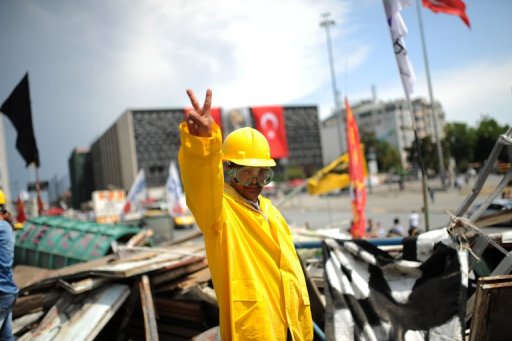 By Fulya Ozerkan (AFP) – Turkish Prime Minister Recep Tayyip Erdogan on Thursday issued a “last warning” for thousands of protesters to evacuate an Istanbul park at the centre of mass anti-government demos, ratcheting up tensions in two weeks of deadly unrest.

A day after meeting with protest leaders and offering to hold a referendum on plans to redevelop Gezi Park, Erdogan resumed his combative stance on the environmental protest that has morphed into the biggest challenge to his Islamic-rooted government’s decade-long rule.

“I’m making my last warning: mothers, fathers please withdraw your kids from there,” Erdogan said in a live television broadcast. “Gezi Park does not belong to occupying forces. It belongs to everybody.”

Demonstrators have been camping out in the park since May 31, when police cracked down heavily on a small campaign to save the site’s 600 trees from being razed.

The crackdown sparked an outpouring of anger across the country against Erdogan and his Islamic-rooted government, seen as increasingly authoritarian after more than a decade in power.

Erdogan inflamed tensions on Tuesday, when riot police stormed Istanbul’s Taksim Square, the focal point of two weeks of protests, prompting a day of violent clashes with tens of thousands of protesters. The intervention fuelled fears that the adjoining Gezi Park would be cleared next.

“Don’t sadden us anymore, let us clean Gezi park and return it to its rightful owners… the people of Istanbul,” Erdogan said, urging environmental protesters to withdraw so that police could clear the site of “illegal organisations”.

The ultimatum came after Erdogan on Wednesday made his first concession yet by offering to hold a popular vote on plans to build a replica of Ottoman-era military barracks in the park.

Demonstrators, many still reeling from Tuesday’s violence that sent clouds of acrid tear gas into their tents, have reacted coolly to the referendum idea and criticised the government for cherry-picking the representatives invited to the talks.

“We don’t agree (with the referendum). We are angry that Tayyip spoke to people who don’t represent us,” said 29-year-old Iskender Sisman, sitting outside a tent in Gezi Park.

“Tayyip must apologise for everything, for the park, for the tear gas,” he added.

Erdogan, who has branded the protesters “extremists” and “looters”, has faced international condemnation over his handling of the crisis.

Four people have been killed and nearly 5,000 demonstrators during the unrest, tarnishing Turkey’s image as a model of Islamic democracy.

The United States said it had been following the events with “great concern” and cautioned the authorities in Turkey , a key regional ally, against seeking to punish demonstrators for exercising their right to free speech.

The mood was more subdued in Taksim, where demonstrators gathered peacefully around a piano for a live concert, sporadically chanting: “Everywhere is Taksim, everywhere is resistance!” as riot police looked on.

By Thursday afternoon, there was a much smaller police presence on the square and traffic was flowing freely, with no sign of fresh protests.

Turkish Interior Minister Muammer Guler said that protests in the park were “no longer sustainable” and urged the thousands camped out there “evacuate the grounds to avoid further tensions” with the police.

Hundreds of determined protesters still swarmed the area however, voicing caution over the Erdogan olive branch.

“We don’t trust the government… We will stay in the park. It’s not just about the trees,” said interior designer Uzay, 25, accusing Erdogan of polarising the country and curbing personal freedoms.

Opponents accuse Erdogan of repressing critics — including journalists, minority Kurds and the military — and of pushing conservative Islamic values on the constitutionally secular nation.

But Erdogan, in power since 2002, remains the country’s most popular politician and has urged loyalists to respond to the demonstrators by voting for his Islamic-rooted Justice and Development Party (AKP) in local polls next year.

His AKP has won three elections in a row and took nearly half the vote in 2011, having presided over strong economic growth in the predominantly Muslim country of 76 million people.

The first campaign rallies will be staged in Ankara and Istanbul this weekend and are expected to gather tens of thousands of party faithful.