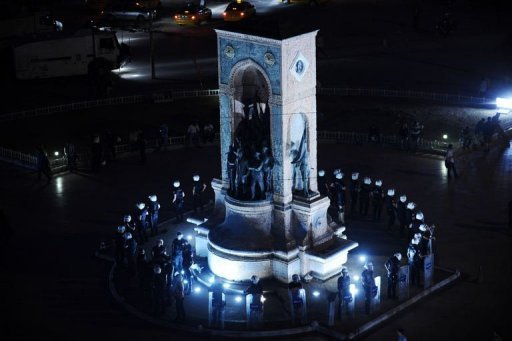 By Ceren Kumova (AFP) – Turkey’s Prime Minister Recep Tayyip Erdogan on Friday agreed to halt plans to redevelop an Istanbul park at the centre of two weeks of mass anti-government unrest, in a move protesters welcomed as “positive”.

It marked the first easing of tensions in the stand-off, which has presented the Islamist-rooted government with the biggest challenge of its decade-long rule and earned it criticism from the West.

Hours after giving a “last warning” to defiant demonstrators camping out in Gezi Park, Erdogan made the concession in his first talks with a key group of protesters to defuse tensions in the crisis.

“The positive outcome from tonight is the prime minister’s explanation that the project will not continue before the final court decision,” Tayfun Kahraman, a spokesman for the Taksim Solidary group, seen as the most representative of the protest movement, said in televised remarks.

An peaceful sit-in to save Gezi Park’s 600 trees from being razed prompted a brutal police response on May 31, spiralling into nationwide outpourings of anger against Erdogan and his ruling Justice and Development Party (AKP), seen as increasingly authoritarian.

The promise to abide by a court decision suspending the redevelopment of Gezi Park was hailed as a win by the protesters, who had earlier balked at Erdogan’s offer to hold a referendum over plans to reconstruct Ottoman-era military barracks on the site in return for evacuating the park.

Speaking after the four-hour emergency meeting, Deputy Prime Minister Huseyin Celik said the government would respect the court’s decision on the project suspension and insisted a popular vote to seal the fate of the park would go ahead.

“But Gezi Park protesters should stop their demonstration now,” he warned.

The court process is expected to take several months. In the meantime, a probe is under way to investigate the use of excessive police force in dealing with the protesters across the country, Celik added.

Some 5,000 people have been injured and four have died in the unrest so far, which has seen police use tear gas, rubber ballets and water cannons on demonstrators who have hurled back fireworks, rocks and molotov cocktails.

Erdogan has responded with defiance to the mass demonstrations and on Thursday again ordered protesters to leave Gezi Park.

“I’m making my last warning: mothers, fathers please withdraw your kids from there,” he said in a live television broadcast. “Gezi Park does not belong to occupying forces. It belongs to everybody.”

But determined campers held their ground despite heavy rainfall and a strong police presence in the adjoining Taksim Square on Friday.

“Do we look like we are going anywhere?,” said Ali, a 32-year-old poet, as he held a rain cover aloft above a pianist playing for protesters in Taksim Square. “We do not trust the government, they will find a way to have their way.”

In contrast with the calm in Taksim, police fired gas and jets of water overnight at around 200 protesters in the capital Ankara, not far from Erdogan’s offices, witnesses told AFP.

The United States and other Western allies have criticised Erdogan’s handling of the crisis and the police crackdown has undermined Turkey’s international standing.

The European Parliament on Thursday passed a resolution warning the government against taking “harsh measures against the peaceful protesters,” earning a rebuff from Erdogan who responded: “Who do you think you are?”

NATO member Turkey has long sought to join the 27-member EU, but efforts have stalled in recent years, in particular over the country’s human rights record.

Istanbul governor Huseyin Avni Mutlu took to Twitter to reassure the campers there would be no intervention without advance warning, even giving out his personal phone number.

While opposition to Erdogan is intense, the 59-year-old has been in power since 2002 and nonetheless remains the country’s most popular politician.

His AKP has won three elections in a row and took nearly half the vote in 2011, having presided over strong economic growth in the predominantly Muslim country of 76 million people.

Opponents accuse Erdogan of repressing critics — including journalists, minority Kurds and the military — and of pushing conservative Islamic values on the constitutionally secular nation.