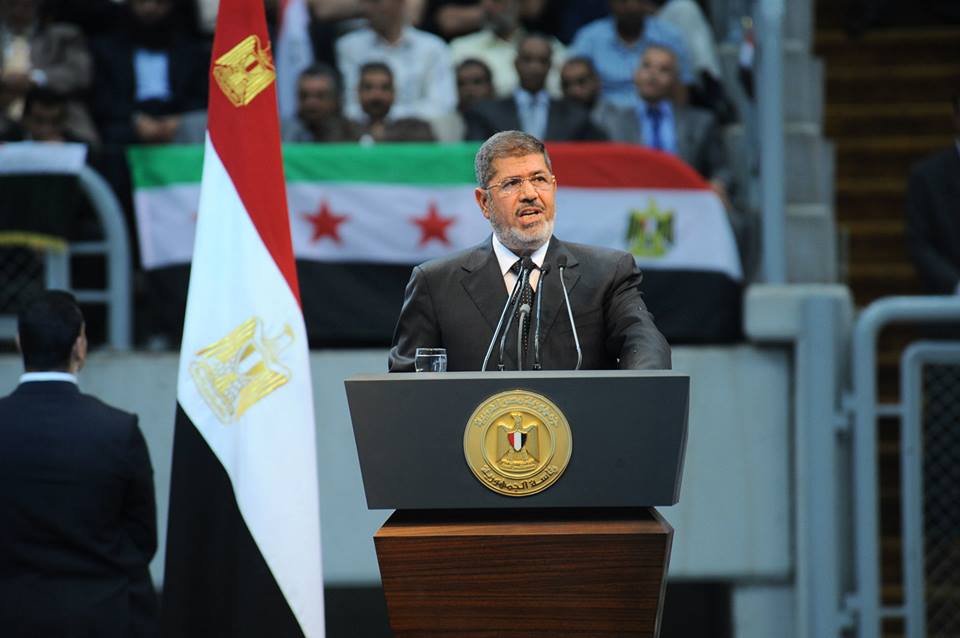 Syrian opposition groups have welcomed President Mohamed Morsi’s support for their uprising against Bashar Al-Assad’s regime voiced in a speech on Saturday. Meanwhile Egyptian opposition leaders have criticised the timing of his announcement ahead of planned anti-Morsi protests on 30 June.

During his address to tens of thousands of his supporters at the Cairo International Stadium, Morsi announced new policies towards Syria, the boldest of which was the decision to sever diplomatic ties, close the Syrian embassy in Cairo and withdraw Egypt’s diplomatic mission from Damascus.

The speech was part of the National Conference for the Support of the Syrian Revolution, a series of events held over the past week. High-profile members of the Brotherhood and Sunni clerics were among the attendees, some also speaking at the event.

Fahd Al-Masry, the media spokesperson of FSAJC, said Morsi’s speech “eased their suffering and pain,” and expressed his wish that the Egyptian government take steps to implement its stance.

He added that he hoped the “courageous” Egyptian military would support the Syrian people, who continue to endure violence across the country.

Reactions to Morsi’s speech varied among political figures and groups

Said Nader Bakkar, vice-chairman for media affairs of the Salafi Al-Nour Party: “We didn’t take part in the conference on Syria due to our reservation on the increased number of events held by the Freedom and Justice Party (FJP) prior to 30 June.”

In his statement, Bakkar asked Morsi to resolve the contradiction between what he said in Moscow about adopting a stance similar to Russia’s, supportive of Al-Assad’s government, and what he said on Saturday about severing relations with the regime.

“The speech was more of a show to threaten those who will protest on 30 June,” said Heba Yassin, media spokesperson for opposition coalition Al-Tayar Al-Sha’aby.
“Speakers accused [opposition groups] of infidelity and the president did not refute these accusations.”

She added that the conference was attended only by the president’s supporters even though Morsi claims to be the president for all Egyptians.

“With every speech he gives, Morsi’s popularity declines and he proves he is incapable of running the country,” Yassin said.

She stressed that only the Syrian people have the right to decide their destiny and no one should interfere in their affairs. “Islamists limited the situation in Syria to a sectarian struggle between Sunnis and Shi’as, not a struggle against an oppressive regime.”

The 6 April Youth Movement released a statement denouncing the speech, saying it demonstrated how Morsi’s regime lacks decisive direction and clear political vision, “whereas the situation in Syria is complicated and requires prioritising stopping the bloodshed.”

Former member of parliament and professor of political science Amr Hamzawy said he suspected cutting relations with Syria was a political bargain with Salafis to gain their support against opposition protests on 30 June.

Hamzawy added that severing ties should not come amid abhorrent sectarianism which President Morsi seemed to promote on Saturday.

“This presidency proves its failure every day, ending it through early presidential elections has become an absolute necessity,” Hamzawy said on his Twitter account.

Morsi said Egypt had begun arranging with Arab and Islamic countries an urgent summit to support the Syrian people.

Deputy Secretary General of the Arab League Ahmed Ben Heli welcomed President Morsi’s call for a summit on Syria, though on Sunday Ben Heli stated the Arab League has not yet received any official request to hold the summit.

On Saturday, Morsi accused Al-Assad’s regime of “genocide” and “ethnic cleansing” against the Syrian people, and he vowed to provide financial and moral support to the uprising.

He said Egypt’s involvement came at the request of the Syrian people. “We will not let them down,” Morsi said.

The president said he is collaborating with Turkey, Saudi Arabia and the Red Crescent as well as civil society organisations to coordinate the delivery of aid to rebels in Syria and Syrian refugees in Egypt.

Morsi called on the Egyptian people to welcome Syrian refugees and treat them as brothers.

Although he opposed western military or political interference in Syria, he called on the international community to implement a no-fly zone over the country.

He also criticised the military intervention of the Lebanese Shi’a militant group Hezbollah which has allied with Al-Assad’s forces against the Free Syrian Army.

Morsi also highlighted what he described as attempts “by loyalists of the old regime” to tear apart the growing stability in Egypt and push the country towards chaos.

“They want to challenge the will of the people, which produced the elections, and will continue to build state institutions,” he said.

He added that some people planned to use violence “out of misunderstanding of the concept of freedom.”