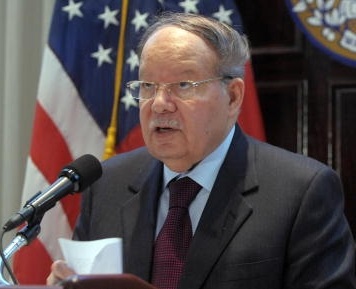 The Illicit Gains Authority on Monday ordered the release of former parliamentary speaker Fathi Sorour on a bail of EGP 200,000 while investigations continue into alleged illicit gains and graft during his tenure.

Sorour is accused of using his position to amass wealth inconsistent with his legitimate sources of income.

Under ousted president Hosni Mubarak, Sorour served as the speaker of the People’s Assembly, the lower house of Parliament, from 1990 until 2011. Before his career in parliament, Sorour had served as education minister.

Sorour was questioned on Sunday regarding reports made by regulatory bodies and witnesses, which have not been made public.  He will face additional questioning on Tuesday and Wednesday.

Lawyer Khaled Bayoumi said being released on bail is usually an indication that there is strong evidence to indict the accused. He said factors such as age and health are usually taken into consideration when contemplating someone’s release pending trial.

Since his arrest following the 2011 revolution, Sorour has been in and out of custody for different charges.

In October 2012, Sorour and 23 former regime figures were acquitted of involvement in orchestrating the deadly attacks on Tahrir Square in February 2011, which became known as the Camel Battle.

Assailants armed with sticks and mounted on horses and camels attacking crowds in Tahrir Square, leaving 11 dead and more than a thousand injured. The former speaker denied the charge of inciting violence.

While the acquittals was met with widespread criticism and large scale protests, the Court of Cassation the prosecution’s appeal of the verdict in May.

Days after the acquittal in October, the Illicit Gains Authority issued an arrest warrant for Sorour, who had failed to show up for questioning twice.