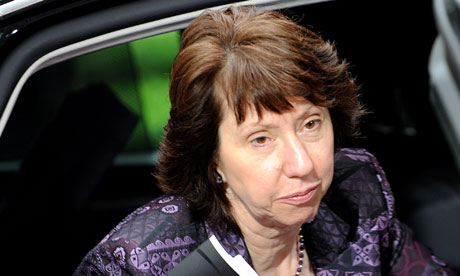 The high representative of the EU for Foreign Affairs and Security Policy and vice-president of the European Commission will meet President Mohamed Morsi and Minister of Foreign Affairs Mohamed Kamel Amr, as well as other ministers and opposition leaders.

Her visit to Cairo is part of a Middle East tour which includes visits to Jordan, Iraq, Lebanon, Egypt, Israel and Palestine.

A press release by the EU stated that Ashton will discuss the latest developments in the Middle East with Secretary General of the Arab League Nabil Al-Araby.

“I look forward to discussing how the EU can continue to help the transition in Egypt,” Ashton said.

Head of the EU delegation to Egypt James Moran said that Ashton is expected to discuss the Egyptian stance on the conflict in Syria as well as international efforts to resolve the Syrian situation.

“No political compromise can be reached [in Syria] without Egypt’s diplomatic clout,” Moran said, according to State Information Services.

He added that Ashton will discuss Egyptian-Ethiopian relations with Egyptian officials in an attempt to ease tensions between the two African countries over Nile water.

Last week, the European Special Representative for the Southern Mediterranean region, Bernardino León, met with representatives of the government as well as political groups to discuss current political and economic situation in Egypt prior to Ashton’s visit.

This is Ashton’s second visit to Egypt in less than three months; her last visit was in April when she met with President Morsi and leading opposition figures.