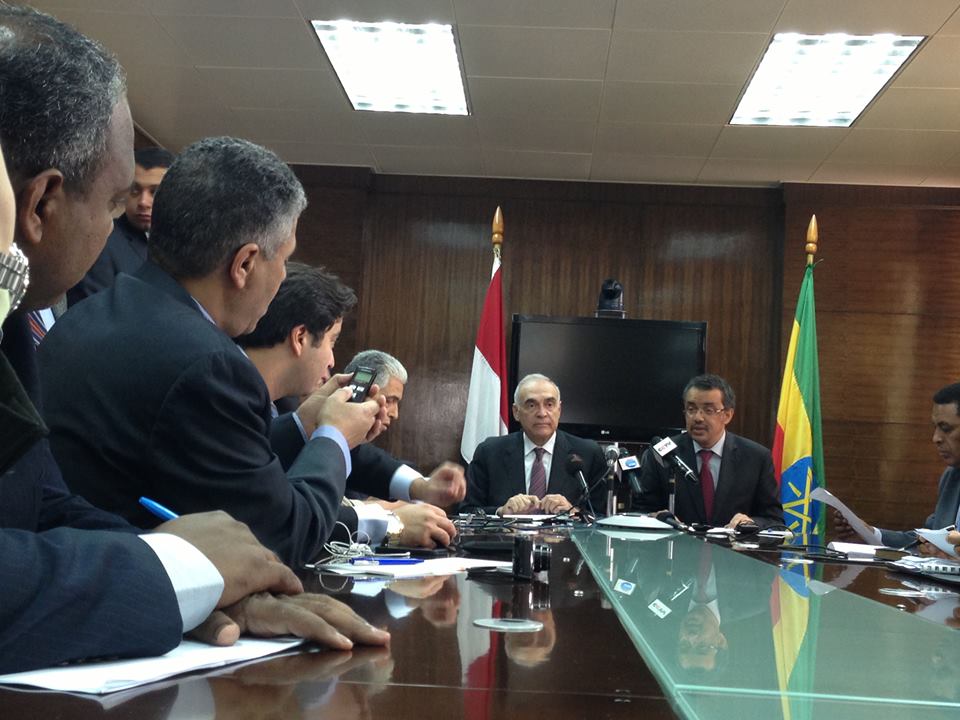 Amr spoke in a press conference upon his return from a visit to Ethiopia and Sudan to discuss the Grand Ethiopian Renaissance Dam (GERD). He described the trip as “a first step to solutions that serve everyone’s interests.”

The next step will be Egypt’s invitation to hold meetings that involve the water resources and foreign ministers of the three countries to hold talks on the implementations of the recommendations of the report of the International Panel of Experts (IPoE) on the effects of the dam. This would ensure that both the technical and political aspects of the issue are tackled. The meeting will be held in the next few days.

The report had suggested establishing a water reserve for downstream countries like Egypt and Sudan to use in case of droughts and emergencies. The report also proposed that Ethiopia conduct more in-depth studies of the effects of the dam.

Egyptian and Ethiopian foreign ministers said in a joint statement on Tuesday that Egypt and Sudan’s water security concerns and Ethiopia’s developmental interests will be taken into consideration when it comes to the GERD.

“Egypt is not against development in Ethiopia or in any country,” Amr said, but emphasised that the Nile is “the only source of water for Egypt” and that protecting the country’s water resources was of paramount concern.

During his visit to the Ethiopian capital Addis Ababa, Amr voiced Egypt’s concerns over the possible effects of the GERD on Egypt’s share of Nile water.

In response, the Ethiopian Minister of Foreign Affairs Tedros Adhanom Ghebreyesus said the dam will be used exclusively for power generation and is being constructed in a way that takes Egypt’s water security concerns into account.

Amr also noted in his conference that the Ethiopian side had assured him that dam’s method of construction would allow for changes to be made.

The Egyptian and Ethiopian foreign ministers agreed on the need to continue dialogue and communication.  Ghebreyesus immediately accepted Egypt’s invitation to visit Cairo soon, and said that he is “committed to a win-win approach as the basis for future cooperation.”

Following the meeting with his Ethiopian counterpart, Amr said the talks were open, honest and constructive. “We agreed on the timeframe and that the negotiations are not open-ended,” he said.

The visit to Ethiopia was followed by another official visit to Sudan, in which Amr met with a delegation from the Sudanese foreign ministry on Tuesday and discussed the results of his visit to Ethiopia. Amr concluded his one-day trip to Khartoum with a meeting with Sudanese President Omar Al-Bashir.

Amr said there is a clear desire among the three countries that none of them be harmed.

A Foreign Ministry spokesperson meanwhile said the trip to Ethiopia is part of a long political process between the three countries to implement the recommendations of the IPoE, and that the talks had been held in a positive atmosphere.

In a ceremony in late May, the Ethiopian government began diverting waters from one of the Nile’s main tributaries, the Blue Nile.

A number of concerns have been raised by Sudan and Egypt regarding the GERD since the start of its construction in April 2011.

Egypt has long received the largest share of the water from the Nile, as per agreements signed in 1929 and 1959, which guaranteed Egypt 55.5bn cubic metres of the estimated total of 84bn cubic metres of Nile water produced each year.