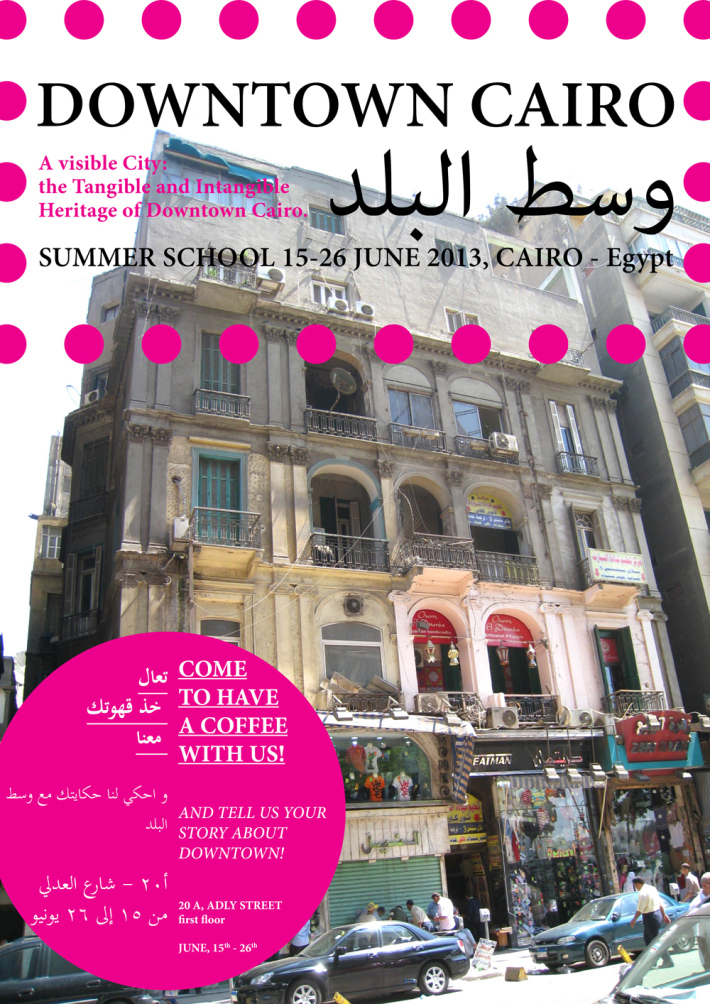 The Summer School is organising a series of lectures on Egyptian architecture in Cairo from 15-26 June and welcomes anyone who is interested in learning more about their surroundings. The idea behind the lectures is to enhance the visibility of Cairo’s architectural legacy, “the tangible and intangible heritage of Downtown Cairo”.

Daily lectures begin at 9am and the Summer School says they would be pleased to share a cup of tea or coffee with people who have stories about old Downtown buildings at any time. “The idea is to make Downtown visible again, not only the architecture but also the people living in Downtown,” said Vittoria Capresi, a professor at the German University of Cairo and one of the initiators of the project.

If you have a favourite old building that you would like to know more about you are invited to visit the Kodak building in El-Adly street in Downtown Cairo and speak with architects and architecture students.

In addition to the daily school programme the architectural project of the Summer School is organising four lectures on Thursday 20, Saturday 22, Sunday 23 and Wednesday 26 June. During these days architects and visual artists will give their views and share their experiences on Downtown edifices and its specific organisation. The first two events will take place in the Kodak building, but the lecture on 23 June will be hosted by Megawra in Heliopolis and the final presentation on 26 June will be held at the German Archaeological Institute in Zamalek.

“The Tangible and Intangible Heritage of Downtown Cairo” is a summer school initiated and organised by Barbara Pampe and Vittoria Capresi (GUC, Architecture and Urban Design Program) in cooperation with the University of Stuttgart, the German Archaeological Institute – DAI Cairo and Al-Ismaelia for Real Estate Investment, fully financed by the German Ministry of Foreign Affairs through the DAAD – the German Academic Exchange Service.” With both a typological and historical approach, through interviewing people on their past and present use of their apartments, the project of the Summer School aims to understand current Downtown Cairo architecture. “Our idea was to present another perspective, to not only speak about the current problems and the belle epoque; about how beautiful it used to be and how ugly it is now,” Capresi explained.

The final product of the Summer School will be the first architectural guide of Downtown Cairo which will be both a scholarly work and available to anyone who has an interest in the architecture of Downtown. “It is good to not only talk about the facade, but also about the people who are living and lived inside the buildings,” said Barbara Pampe, professor at the German University of Cairo. “We were thinking that a guide could also be really useful to the people who live Downtown.” Pampe and Capresi want to include the insides of the buildings in a future project: “We want to develop an application for phones that will allow people to have a tour through the inside of the buildings.”