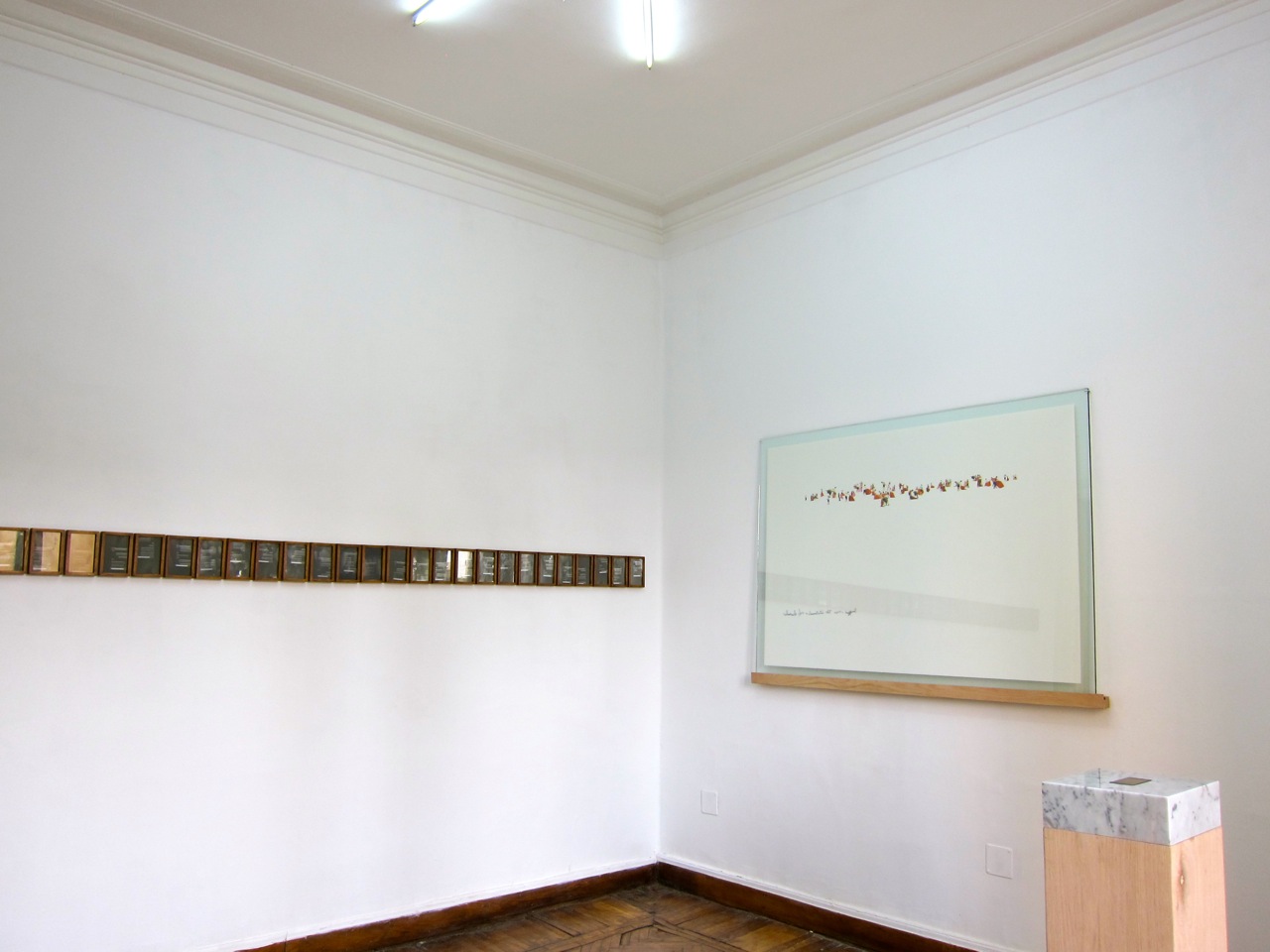 The flat is warm and there are cookies and a cup of tea on the table. To the left, a room is dedicated to Mahmoud Khaled’s exhibition, called It’s Never Too Late to Talk About Love. Otherwise, the apartment is occupied by its inhabitants, artists Taha Belal, Hady Aboukamar and Jenifer Evans.

There is a simple story behind the unusual venue of the exhibition: the flatmates did not know what to do with the last empty room of their apartment in Garden City, so they decided to dedicate it to art, and in particular to the kind of art they felt was not given enough space. The spare room became Nile Sunset Annex in January 2013.

It is a “self-funded, experimental and artist-run space,” Evans explained. “It offers local and international artists a space to realise month-long exhibitions, as well as organising group shows.”

Mahmoud Khaled’s pieces are currently on display. “We are interested in physical artwork that has a presence in the space,” Belal said. Five artworks of very different formats are included in the current exhibition It’s Never Too Late to Talk About Love by Khaled, and have never been shown in Egypt before.

“The idea of this exhibition appealed to us because the works are multimedia pieces that exist in real space and have an actual physical presence, which we try to have an emphasise,” Evans said.

The left wall of the room is crossed by a series of small framed prints. “Do you have work tomorrow?” is a piece made of screenshots of an iPhone conversation between two lovers in a suspended city. The small books MKMAEL Stories are a cheap collection of romantic stories that echo the first piece. Through different formats Khaled explores the formulation of romance stories and the cliches they convey.

In front of the visitor and occupying a large part of the wall a print is fixed between two sheets of glass held by a wooden rod. On the print Khaled placed small pictures of matadors practicing and on the glass he wrote a single sentence: “Rehearsals for a demonstration that never happened.” The fragility of the installation underlines the violence of bullfighting. “The idea of rehearsing, imagining a bloody demonstration or performance, to deal with it as if it is real or will happen but it the meantime it may never happen at all… This idea was very interesting to me,” Khaled said.

It’s Never Too Late to Talk About Love tackles the representations of masculinity, dreams, love and demonstrations of love, recurring reflections in Khaled’s work. The piece Proposal for a Romantic Sculpture is a clear reflection of this. “It started from the desire to produce a romantic sculpture, a desire to materialise my work,” he said. The piece impresses with the beautiful combination of a wooden base with an iPod captured in a layer of marble resting on the top. Jacques Brel’s trembling voice and desperate words “Ne me quitte pas” (Don’t leave me) poignantly accompany the video of a man tattooing the song title on his skin. “I deal with video as if it is another material,” Khaled said. This approach works; the virtual images of the tattooed man become a tangible part of the sculpture.

The last piece Please Stay Blurry is composed of posters intentionally shaped into a sculpture. As the posters are not in their normal flat format they take on another dimension. “It is a decision to break this monumentalisation of the image, that is the reason why I decided to present it this way,” Khaled explained. “As a form, it is very fragile and feminine.”

The current exhibition will last until the 6July and can be viewed on Saturdays or by appointment.