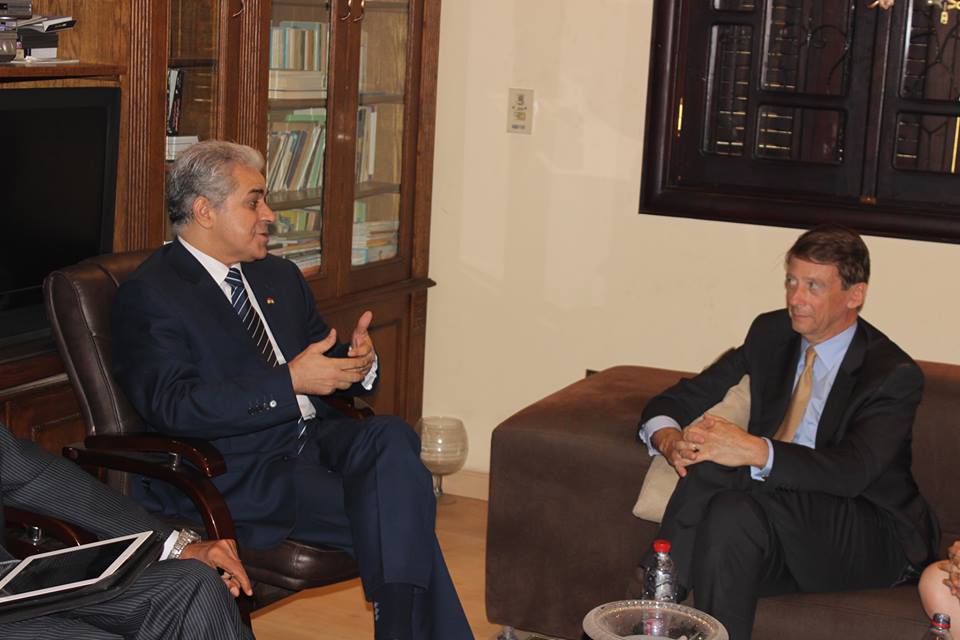 In a meeting on Tuesday held between Sabahy and Watt at opposition group Al-Tayar Al-Sha’aby’s headquarters, Sabahy said political movements participating in 30 June are committed to avoiding being drawn into any violent confrontations.

Sabahy, the leader of Al-Tayar Al-Sha’aby and leading figure in the National Salvation Front, stated that the Muslim Brotherhood and its affiliates are threatening to use violence against the 30 June protesters.

He added that such threats are no more than “scare tactics used by the Brotherhood to frighten people out of taking part in the protests.”

Al-Tayar Al-Sha’aby released a statement after the meeting saying Watt applauded Sabahy’s political speeches where he calls for adhering to peaceful protesting.

The British ambassador also reportedly commended Al-Tayar Al-Sha’aby’s efforts to offer solid alternative policies, adding that the movement is one of the most important opposition movements in Egypt.

Former presidential candidate Sabahy expressed his opposition to Egypt’s pending $4.8bn International Monetary Fund during the meeting, saying loans from international institutions should not be coupled with lifting subsidies that help the poor.

Hossam Mo’nes, Al-Tayar Al-Sha’aby’s official spokesperson, stated that any meetings between Sabahy and Muslim Brotherhood leaders are highly unlikely as long as the Islamist group refrains from meeting the people’s demand to hold early presidential elections.

“Such rumours about meetings are started by Islamist leaders affiliated with President Mohamed Morsi to break up the opposition and raise question marks over its leaders’ national stances,” Mo’nes said in a statement.

Opposition movements are planning nation-wide protests on 30 June to call for early presidential elections. The protests were originally called for by the Tamarod campaign which is collecting signatures from citizens withdrawing their confidence in Morsi as president.