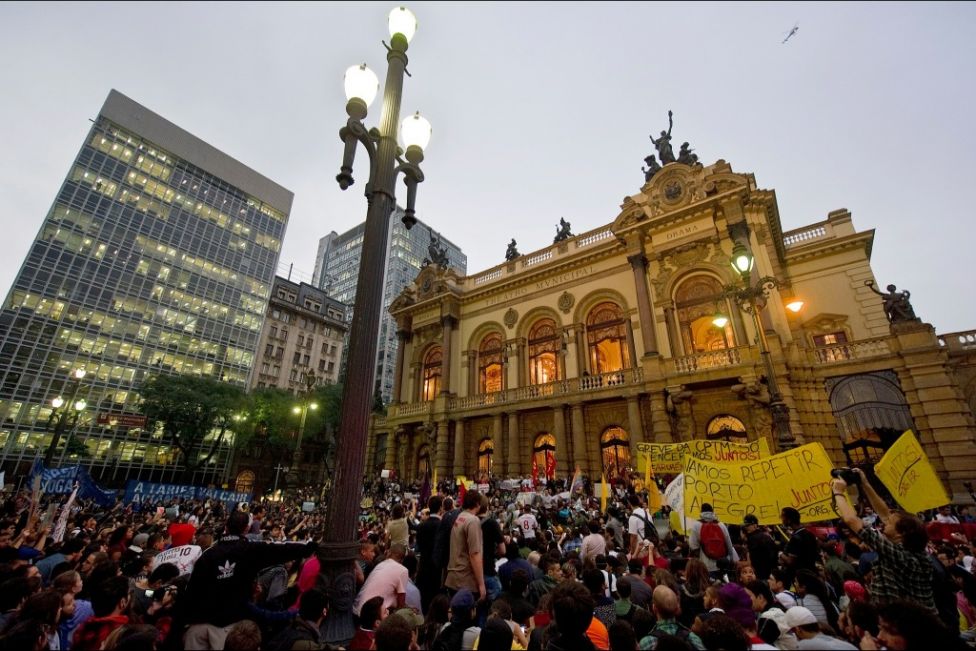 The people have awoken. This was the rallying cry with which thousands of Brazilians took to the streets in the past few weeks against the increase in public transport fares. Protesters occupied the streets of Sao Paulo, Rio de Janeiro, Porto Alegre, Brasilia and various other cities against the public’s dissatisfaction with their rulers.

The masses brought the primary roads in the country to a halt, such as the Rio Branco Avenue in Rio de Janeiro, where an estimated 100,000 people took to the streets in protest. In Sao Paulo, Avenida Paulista was the epicentre of six mass demonstrations demanding the abolishment of the increased transportation costs.

Most major protests in the major cities were marked by the brutality and repression of the protesters by the military police. Cowardice marked the military tactics on 13 June, when their tactics became apparent; more than 200 people were detained, and at least 100 left injured by the use of tear gas and rubber-coated steel bullets.

These protests, in varying sizes, can be found across the country. While the overt message may surround the small increase in public transportation fares, the underlying sentiment is intricately tied with more than two decades of growing corruption and the government’s gross over-spending in preparation for the football World Cup in 2014.

In fact, the billions of dollars spent on the World Cup has highlighted a great disparity among Brazilians. The raise in public transportation fares was merely a drop in a bucket which ignited the people’s desire to see reforms in education and healthcare.

“What a coincidence; no police, no violence,” “The people have awoken,” and “Its not just the 20 cents” have become widespread chants among protesters in the country and across social media, a crucial platform for Brazilians in disseminating information regarding police repression. Indeed, it was largely through Facebook that masses were informed and mobilised into action.

The proliferation of Facebook actually became such a used tool that the phrase “We left Facebook” has become a commonplace reaction to criticism from the general population accusing people of being couch activists.

Indeed, being unaccustomed with protests and still being part of a conformist culture, the middle class has reacted to the protests by demanding a stronger police reaction against the “troublemakers that have brought the city to a halt,” as the protesters were seen.

Of course, the protesters are not entirely without blame; with so many people out on the streets, there are bound to be negative attitudes among the crowd. The state news has turned its focus on to the vandalism, rioting and looting that occurred in small, isolated incidents. The protests were organised to be completely peaceful, but there were those who had ulterior motives to participate.

The unrest in Brazil is, within context, similar to the Arab Spring; we as a people are facing the ruling regime and the occupation of the congress building has become a common symbol of popular resistance.

Regardless of the future of Brazil’s populist demonstrations, it has already resulted in tangible changes. Sao Paulo, Rio de Janeiro, Florianópolis, Porto Alegre, Recife are some of the cities in which the government conceded and reversed its decision to increase prices. Now after this first victory, protesters are pushing forward with their demands for better public transportation, even setting their sights on the complete abolition of public transport fares.

Arthur Stabile is a jouralism student and blogger from Sao Paulo, Brazil. He has frequently participated in the protests against the tariff hikes in public transportation. Stabile has witnessed first-hand the violence and brutal repression by the Brazilian police.