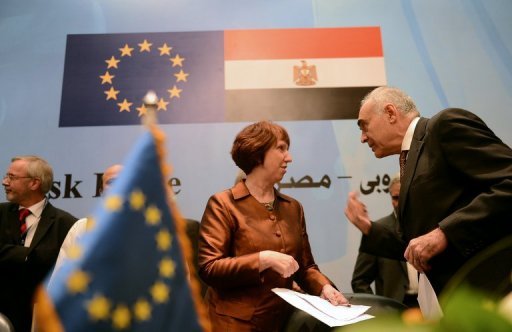 According to an EU press release, Ashton and Amr agreed on their support of the Geneva II meeting on Syria. Ashton remarked that the meeting “is a solution that is going to be necessary if we are going to end the bloodshed, stop the fighting and bring peace.”

“I’ve been travelling in the region and I’ve seen the effects of so many people displaced from their homes,” Ashton said. “I pay tribute to all the countries, including Egypt, which have looked after people so well, but now we really do need to move forward.”

Ashton also met with President Mohamed Morsi; the two are said to have discussed the Syrian crisis and the construction of the dam. On the dam, Ashton said the EU was following the developments closely, while praising Amr for meeting with Ethiopian officials and having fruitful conversations.

Ashton went on to highlight the ways in which the EU provides aid to Egypt, emphasising its continued commitment to do so during difficult economic times.

“We put a lot of emphasis on supporting the poorest people in your population,” Ashton said. “And that money is coming through our projects and programmes.” She continued by saying the EU encourages growth of small and medium sized enterprises in Egypt, calling them the “backbone of the economy.”

Much of this money, however, is linked to the ongoing International Monetary Fund (IMF) discussions and the proposed loan if Egypt can meet the requisite reforms. “We want to see this country moving forward to see the kind of developments that are going to be so necessary, and to back it with our resources,” Ashton said.

EU aid to Egypt is based on the “more for more” policy, contingent on the number of reforms the government carries out in line with EU and IMF desires. The more this occurs, the more aid is made available to jumpstart Egypt’s economy.

Egypt has been in ongoing negotiations with the IMF for months and has yet to reach an agreement on reforms.

One such reform is the abolition, or a large reduction, of various subsidies aimed at easing the economic burden on the poor. The subsidies on food, fuel, electricity and other commodities cost the state hundreds of millions of Egyptian pounds annually, further straining the already fragile economy.