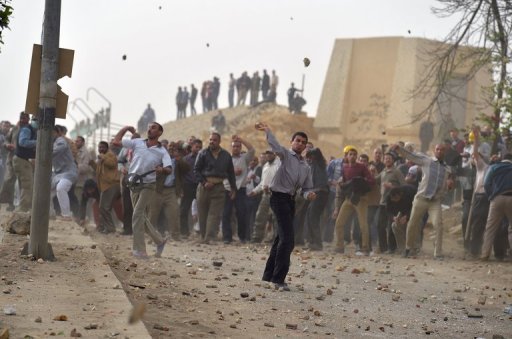 A coalition of Islamist parties and groups intend to “defend the president’s legitimacy” in a mass demonstration on Friday.

The demonstration in Nasr City at Rabaa Al-Adaweya Mosque comes in response to mass opposition protests planned for 30 June against President Mohamed Morsi, and was dubbed “no to violence” earlier this week.

On Wednesday the Muslim Brotherhood’s Guidance Bureau held a meeting with the consultative council of Al-Jamaa Al-Islamiya to discuss plans for the demonstrations and “how to effect a national alignment during the current phase in the country’s stabilisation and development process…and face the counterrevolution.”

Participants of the demonstration include the Muslim Brotherhood, the Freedom and Justice Party, Al-Jamaa Al-Islamiya, the Building and Development Party, the Hazemoon Movement, Al-Wasat Party, and Al-Islah Party.

The Salafi Da’wa and its Al-Nour Party announced it would not join any demonstrations, whether they be Friday’s demonstration or the 30 June protests announced by the opposition.

Clashes broke out in Fayoum and other cities this week between Tamarod volunteers and supporters of President Mohamed Morsi. The FJP held NSF leaders Amr Moussa, Mohamed ElBaradei, Hamdeen Sabahy, and Al-Sayyed Al-Badawi responsible for the violence, and said Tamarod were seeking to sow chaos and violence in the country leading up to 30 June.

“These are calls for action, apparently for political demands, but in fact for bloodshed, violence and vandalism.”