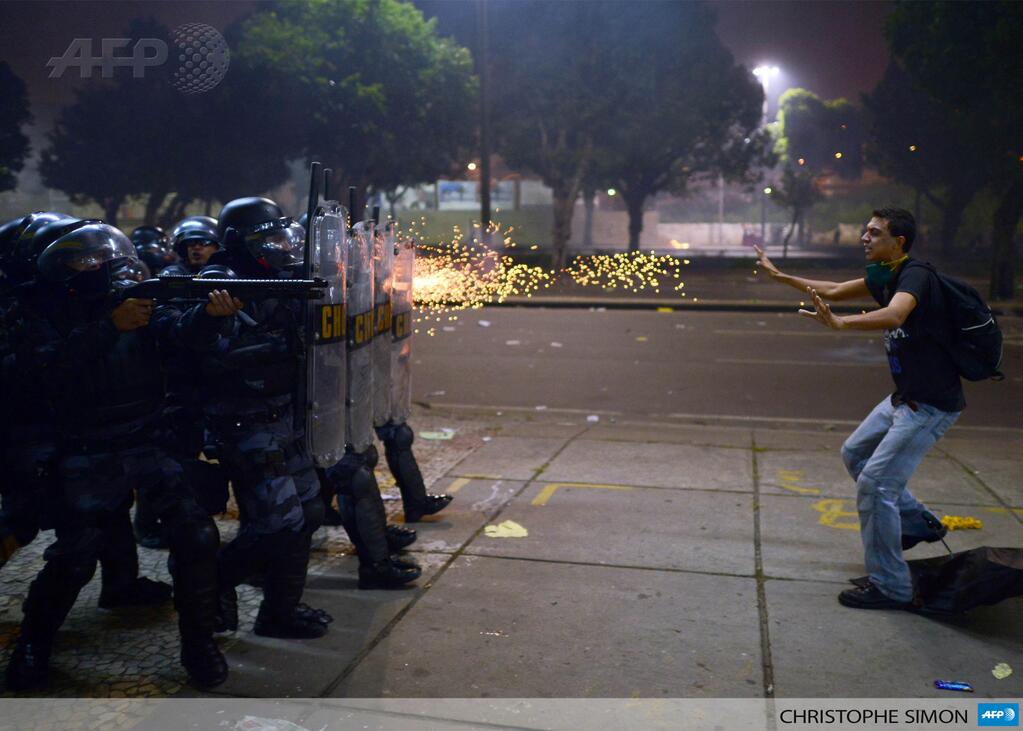 The mass demonstrations, which have sometimes turned violent, are taking place as football-mad Brazil is hosting teams from around the world for the Confederations Cup, a dry run for next year’s World Cup tournament.

Many Brazilians are angry over the expensive preparations for the World Cup and the 2016 Summer Olympics.

Several of the demonstrations have been held outside stadiums, and a mammoth march is scheduled for June 30 to Rio’s iconic Maracana stadium on the day of the Confederations Cup final.

In Rio, riot police fired tear gas and rubber bullets, then charged a large crowd of protesters after a smaller group hurled rocks at the officers.

One demonstrator stood his ground and challenged police while thousands fled in panic. “No violence!” he cried, just as he received a blast of rubber bullets in his chest.

“If you want to be safe, don’t come to Rio de Janeiro, don’t come to the World Cub, because if you do you’ll be helping this government that shoots at us,” said Rodrigo Neves, 20, one of the protesters.

The mounting pressure on Rousseff’s government in the face Brazil’s biggest street protests in 20 years prompted her to also cancel a trip to Japan planned for next week.

More than 1.25 million people marched Thursday in more than 100 cities across this country of 194 million people, according to police and experts quoted by the local media.

The marches began as a protest two weeks ago against a raise in bus fares, but quickly expanded into a wider call for an end to corruption in the world’s seventh largest economy, a call fueled by resentment over the $15 billion cost of hosting the Confederations Cup and the World Cup.

The movement has no political hue and no clearly identified leadership.

The announcement Wednesday that the controversial fare hikes would be canceled in Rio and Sao Paulo, Brazil’s two most populous cities, did nothing to placate the protesters.

Some 300,000 protesters marched to City Hall in Rio de Janeiro to vent their anger.

In Brasilia, where 30,000 people protested, one group broke through the police barrier surrounding Brazil’s foreign ministry and hurled home-made firebombs at the building.

At least 35 people were wounded, three seriously, as law enforcement struggled to keep the crowd at bay, police said.

The first fatality of the protest was an 18 year-old man who was struck by a car while he protested in the southeastern city of Ribeirao Preto, police said.

Most of the protesters are middle-class, educated youths marching to express their outrage at the high cost of living and the poor quality of public services.

Demonstrators also set ablaze a vehicle owned by the SBT television station — many protesters believe the mainstream media is downplaying the size and intensity of the protests.

Mobs even hurled stones at vehicles driven by members of FIFA, football’s governing body, in northeastern Salvador, where 20,000 people protested just two kilometers from a stadium where a Confederations Cup game was being played.

In Sao Paulo, an estimated 110,000 people flooded the main Paulista Avenue to celebrate the fare rollback and keep the pressure on Rousseff’s leftist government to increase social spending.

“Victory, this is just the beginning,” one huge banner read.

The protest was largely peaceful except for clashes between a group of leftists marching behind their red banners and a majority of demonstrators who objected to the presence of political parties.

“This is a social movement, not a political movement. This has nothing to do with ideology,” 28-year-old protester Maria Vidal told AFP. “We don’t want parties in the demonstration.”

Protesters say they want higher funding for education, health and housing. They are also railing against what they view as rampant corruption within the political class.

Social media networks have been key to the organization of the mass protests, with demonstrators using the slogan “It’s more than just 20 cents” — a reference to the bus fare hikes — to rally people to their cause.