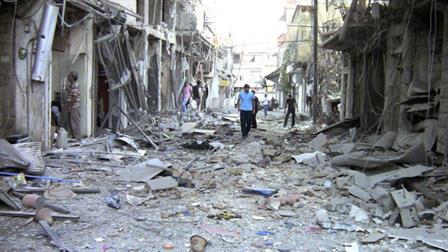 AFP – Syrian troops bombarded the Damascus neighbourhood of Qabun on Friday as they pressed a bid to drive rebels out of the district, activists said.

“Regime troops renewed shelling this morning of the Qabun neighbourhood and fierce clashes were underway between soldiers and rebels on the outskirts of the area,” the Syrian Observatory for Human Rights said.

“Regime forces are hitting the area with mortar rounds, tanks and heavy artillery,” the group added.

The fighting came on the third day of a regime attempt to clear rebel forces from the neighbourhood in northeastern Damascus, one of several districts on the outskirts of the capital where opposition forces have a foothold.

The clashes killed at least one rebel fighter, and there were reports of deaths among regime troops as well, the Observatory said.

An explosion shook the neighbourhood around midnight (2100 GMT Thursday), the Observatory added, but it was unclear what had caused the blast and there was no word on any casualties or damage.

In the northern city of Aleppo, regime forces shelled districts, including the northern Sheikh Maqsud neighbourhood, and clashes left at least two rebels dead in the central Sulayman al-Halabi district.