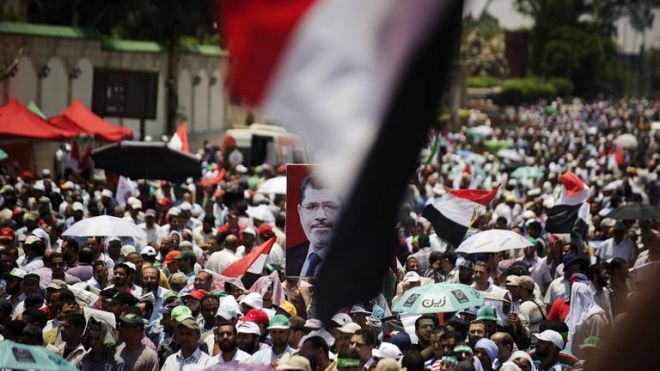 The Conscience Front applauded the position of the Armed Forces for its “withdrawal from the political scene” during a Saturday press conference, and called on the judiciary to adopt a similar stance.

“The great Egyptian army is the nation’s shield,” the statement read. The Front added that “nobody has the right to stand in the way of any elected institution, to attack state institutions or to speak on behalf of the Egyptian people.”

Mohamed Al-Beltagy, Front member and leading Freedom and Justice Party (FJP) figure stated that despite the Front’s “utter respect” for the judiciary, the latter’s “unjustifiable” acts cannot be denied. He stated that the Supreme Constitutional Court (SCC) has repeatedly stalled the democratic process.

“The Egyptian arena resembles a couple of trains moving in the opposite direction from one another,” Al-Beltagy said. “They might collapse at any time and then we would be faced with the bloody aftermath.”

In reference to the planned 30 June protests calling for early presidential elections, Al-Beltagy stated that those calling for the protests must face the people with the options available. “The people can get to choose between either the democratic mechanisms, or other mechanisms which are farthest as could possibly be from democracy.”

The Tamarod (Rebel) campaign which originally called for the 30 June protests is proposing that the SCC chairman take over the country until a new president is elected in the event that President Mohamed Morsi steps down.

“Taking down a democratically elected president and replacing him with the SCC chairman is unconstitutional,” Al-Beltagy said. “Some people are trying to drag the judiciary into political affairs the same way they had earlier tried to drag the Armed Forces.”

President Morsi spoke about the 30 June protests during an event celebrating the 50th anniversary of the Arab Engineers’ Union held on Saturday.

The president stated that no political faction can enforce its opinions on everybody else, reported state-run Al-Ahram. He added that the goals of the 25 January Revolution were the revolution’s driving force.

Every revolution has its enemies, Morsi said, adding that “our revolution” would succeed despite the challenges it faces.

Morsi applauded the protests held by Islamist forces in Nasr City on Friday to condemn violence, saying that those protests reflected “the true face of the peaceful Egyptian revolution.”

Thousands of supporters of President Morsi demonstrated on Friday in anticipation of 30 June opposition protests.