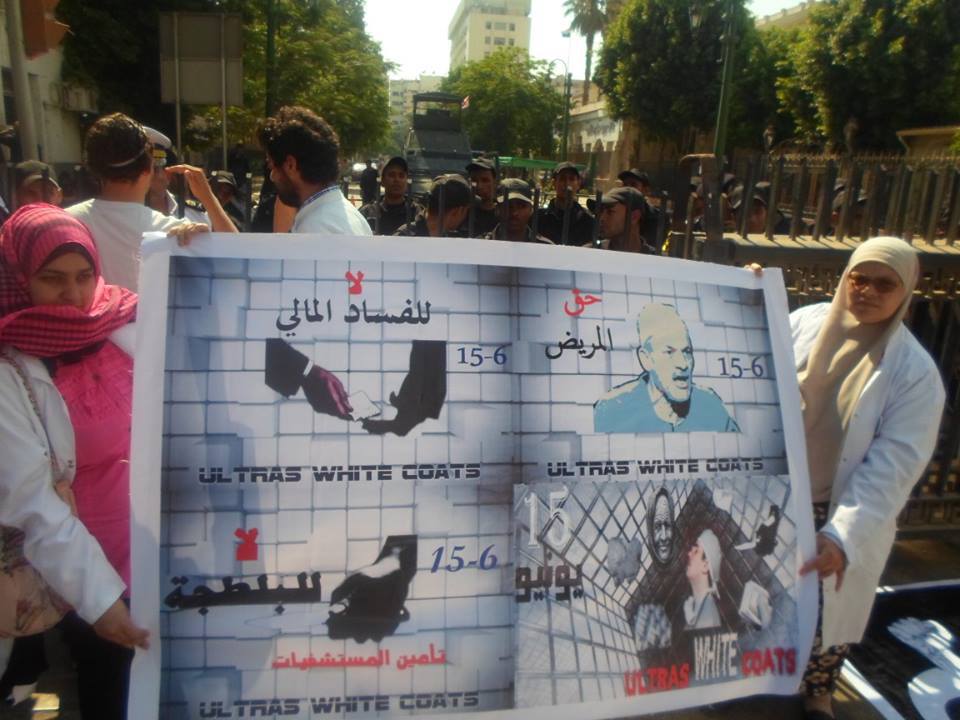 Doctors and other medical professionals decided to leave the vicinity of the Ministry of Health on Thursday, where they had been staging a sit-in to demand proper implementation of the doctor staff law and an increased state healthcare budget since 15 June.

The doctors held a march on Saturday 15 June from the the Doctors’ Syndicate to the Ministry of Health, after which dozens pitched tents and camped outside the ministry, saying they would stay until their demands were met.

While the protesters are collectively referred to as doctors, healthcare professionals of all types are participating in the protest.

Ultras White Coats explained in a statement on Thursday their decision to abandon their protests at the ministry. “The current political situation [in the country] is an obstacle to escalation because it [escalation] is being used politically… We believe that the doctors’ demands are [the same as] the peoples’,” the statement read.

Doctors Without Rights and Ultras White Coats had requested that participants refrain from raising any partisan banners.

Mohamed Abdel Sattar of Ultras White Coats said, “We did not want to be counted as part of a certain political group.” He added that any action the doctors take now will not have an impact because “most people’s attention is on the political situation in the country.”

The doctors also said they are suspending their action because they believe that they have a significant role to play in treating the injured in field hospitals should upcoming protests turn violent.

The protesting doctors demands include: a gradual increase in the state’s healthcare budget to at least 8%; harsher punishments for perpetrators of aggression against doctors and hospitals; and the full implementation of the staff law, a monetary and administrative law that would economically rank medical staff members according to their degree and working experience, starting 1 July.

These are the same three demands that prompted doctors to hold a partial strike last year. The strike, which started 1 October, 2012 and lasted over 80 days, ended in December with the promise that the staff law would soon be issued and implemented.

The decision to strike last year resulted from a general assembly of the Doctors’ Syndicate in September 2012. This recent action, while independent from the Doctors Syndicate’s central authority, was supported by its Cairo and Alexandria branches.