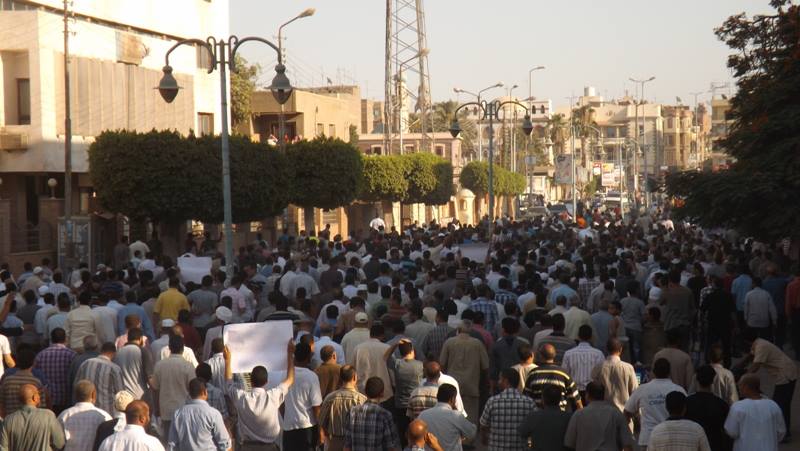 According to the Freedom and Justice Party’s (FJP) official statement, the victim, Mohamed Shalakany, has no affiliation to any political party or movement, and was hit with birdshot while defending “women and children at peaceful protests supporting President Mohamed Morsi’s legitimacy” in Fayoum last Sunday 16 June. Shalakany was immediately transferred to Cairo for hospitalisation, where he had remained since.

The FJP accused members of the Tamarod campaign, the National Salvation Front (NSF) and Mohamed Hesham, a member of the now-dissolved National Democratic Party, of “murdering the first martyr for legitimacy.”

“An alliance of interests has united former regime affiliates, Tamarod militias and NSF thugs, who [could not handle] their failure in the elections and have thus made repeated attempts against [the legitimate government], spreading chaos, arson, sabotage and bloodshed,” the statement read.

Hoda Abbas, a Tamarod member who was present during the clashes, said that she and four other Tamarod members were the only opposition members in the vicinity of the marches. Abbas said the group was sitting in front of Tamarod headquarters in Fayoum when Brotherhood marchers approached them “wanting to pick a fight.”

“We only hit them back with rocks with the help of some Ultras members. The marchers are the ones who came to us, and after clashes erupted, they changed course and went to Al-Hawatem Square, where they were beaten by residents.”

Abbas added that Mohamed Hesham was not present during the clashes; only his brother was there, “sitting peacefully” in front of Hesham’s company headquarters in Fayoum.

Abbas claimed that some of those accused by the FJP of killing Shalakany were not present in the protest, including Fares Tohami and Ahmed Adel. In contrast, she said that another accused, Ayman Bakry, was present, but had been stabbed by one the Brotherhood members.

Tensions in Fayoum are part of nationwide clashes between supporters of President Morsi and opposition movements organising protests on 30 June against the president. The protests were originally called for by the Tamarod campaign, which has been collecting signatures from citizens withdrawing their confidence from President Morsi.

Neither the FJP nor the Muslim Brotherhood could be reached for comment.