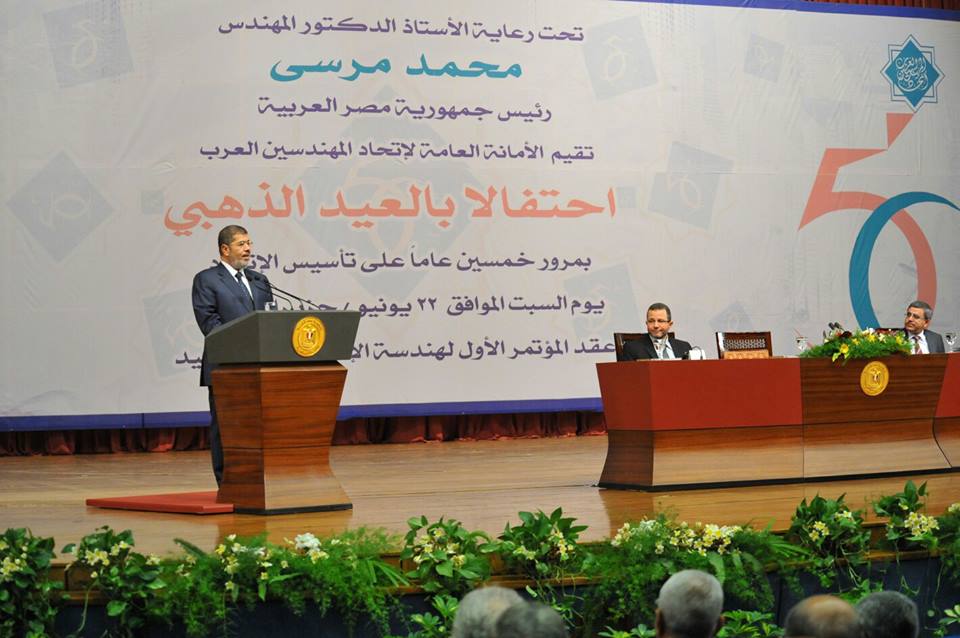 The National Salvation Front (NSF) condemned on Saturday President Mohamed Morsi’s statements, made during 50th anniversary celebrations for the Arab Engineers’ Union, in which he voiced strong praise for Friday demonstrations by Islamists.

Morsi had applauded on Saturday the Friday protests held by Islamist forces in Nasr City to “condemn violence”, saying that these rallies “reflected the true face of the Egyptian revolution’s peacefulness and civility in expressing opinion.”

The president stated that no political faction could force its opinions on others, adding that the goals of the 25 January Revolution were the revolution’s driving force. Every revolution has its enemies, Morsi said, adding that “our revolution” would succeed despite the challenges it faces.

Responding to Morsi’s praise of the rallies, the NSF stated the president had “completely and deliberately ignored the explicit calls for hatred, incitement of violence, and sectarian strife, as well as the obvious attempt to push Egypt towards a civil war by labelling supporters and opponents of Morsi as either ‘believers’ or ‘infidels’.”

The Nasr City speeches also contained “direct and explicit attacks and insults directed against personalities and institutions that all Egyptians respect and appreciate,” the NSF said. The NSF went on to cite a number of parties they say had attested to attacks made by Friday protestors. This included the Grand Imam of Al-Azhar, the Pope of the Coptic Orthodox Church Tawadros II, and members of the Armed Forces, the judiciary and the media.

The Front said it considered certain factors responsible for the heightened determination of the Egyptians to protest on 30 June. Among those cited were the “continued denial of reality by the Muslim Brotherhood and the presidency,” and their “complete failure in managing the country’s affairs for a whole year, as well as the obvious bias towards a certain political faction.”

The NSF stressed that the upcoming 30 June demonstrations would be peaceful, pre-emptively blaming any potential bloodshed on “those who incited violence during Friday protests dubbed ‘no to violence’.”