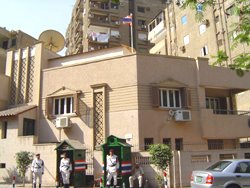 The Thai embassy in Cairo commented on the recent altercation between First Secretary Kakanang Amaranand and an Egyptian couple on 13 June in a hotel bar. In an interview with the Daily News Egypt, Thailand’s Ambassador Chalit Manityakul spoke about the accusations levelled against Amaranand, and what is currently being done by Thailand’s Ministry of Foreign Affairs to investigate the matter.

Following the events of 13 June, Amaranand reportedly received death threats via social media. Amaranand is currently in Bangkok, where she is expected to present her version of events to the committee.

“The Ministry of Foreign Affairs has summoned our first secretary back to Bangkok to make a very serious investigation into what happened that night and to listen to her explanation, as well as to ensure her security,” Ambassador Manityakul said.

“When an official, civil servant or diplomat has engaged in this kind of incident,” the ambassador said, “The first thing we do is set up a committee to examine the matter.”  The committee then collects statements from all the relevant parties and looks at all the evidence made available. “We have not yet decided what to do. It depends on the result of the investigation,” he added.

There are various outcomes to the committee’s investigation, depending on whether or not Amaranand is found guilty and the seriousness of the offence. “If a very serious violation of the Civil Servant Code of Conduct is committed,” Ambassador Manityakul said, “It can result in the personnel being demoted, having their salary cut or in the worst cases being fired and having their diplomatic licence revoked.”

If the committee finds Amaranand innocent, then her duties could resume as before. According to the ambassador however, being summoned back to Bangkok is a blemish on an official’s reputation and could very well affect their career in the future. “Whether she is considered innocent or guilty, in my opinion that has already hurt her career,” he said.

The ambassador met with Rana Ashraf, the Egyptian woman who claims to have been assaulted by the first secretary. He confirmed she had a bruise on her face and bite marks on her arm, adding that Amaranand also presented injuries on her head. “I told [Ashraf] everything I could do and had done, the rest depends on the committee and the couple themselves,” he said.

One point of contention for Ashraf and her husband is the fact that Amaranand has diplomatic immunity, a fact the first secretary allegedly boasted about numerous times over the course of the evening of 13 June.

“Normally if we find our diplomat is involved in a serious violation of the receiving state’s laws we can summon the person back for further investigation,” Manityakul said. “If a person is found guilty we will undertake disciplinary action straight away, fairly and transparently, or we waive diplomatic immunity and let the receiving state conduct their criminal procedure in the courts or whatever [authority] is fit for that offense.”

Dispelling rumours circulated by several news outlets that the Thai foreign minister has spoken out in defence of the first secretary, Manityakul said there will be no official position regarding the charges against her until the committee presents its findings. “We have to provide justice to everybody, so let’s hear from both sides,” he said.

Regardless of the outcome of the investigation, Manityakul said he sees this as a personal conflict which should not affect the relationship between Thailand and Egypt. “Our cooperation has been cordial for a very long time and we should move on in order to strengthen our relations, and not let anything disrupt our mutual and cordial relationship,” he said.