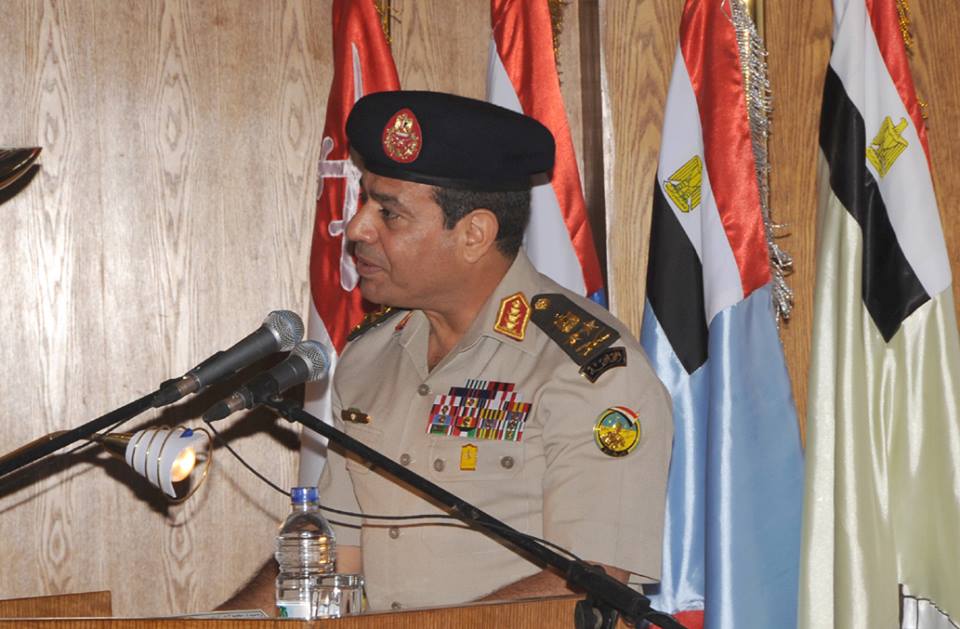 President Mohamed Morsi met with Minister of Defence Abdel Fattah Al-Sisi late on Sunday to discuss the security plans and preparations of the Armed Forces during the upcoming period.

The president demanded that the Al-Sisi coordinate with the interior minister to take all necessary steps to secure vital and strategic installations.

The meeting comes after Al-Sisi’s controversial statements on Sunday expressing the military’s readiness to intervene in domestic politics, made at a cultural seminar attended by military personnel.

The minister said that the military has avoided involvement in the political arena, but its national and ethical responsibility towards the Egyptian people necessitates intervention to prevent the country from “slipping down a dark tunnel of criminality, treason, sectarian strife, or collapse of state institutions,” should any unrest occur.

Al-Sisi’s statements come amid fears of clashes, with opposition groups calling for protests on 30 June demanding early presidential elections, while the president’s supporters have vowed to hold an open-ended sit-in starting on 28 June.

Hazem Salah Abu Ismail, leader of Al-Raya Party and disqualified presidential candidate, criticised Al-Sisi’s statements, considering them a “blatant attack” and the beginning of a “termination process” to undo the work of the Egyptian people over the past two years.

Abu Ismail said that the lack of criticism for Al-Sisi’s previous statements had only emboldened the minister’s rhetoric. He also criticised the “harmony” between statements made by the military, the police and the opposition.

“This harmony calls for unprecedented [measures],” he stated on his official Facebook page.

“The statements expressed the extent of discomfort national institutions are [feeling] with the violence that took place over the past week throughout the country under the pretext of demonstrations” Al-Katatny said.

He added that “enemies of the revolution” were trying to drag the country towards chaos, sectarianism and bloodshed “through taking advantage of the atmosphere of freedom and democracy achieved by the 25 January revolution.”

Al-Katatny said he appreciated the military’s commitment to stand against any threat to the security of the people and the stability of the country, and called on opposition parties to take part in a national dialogue to unite against “those trying to steal the revolution.”

Egypt’s main opposition bloc, the National Salvation Front (NSF) expressed its deep appreciation for the military and its support for the will of the people.  “We value the military’s rejection of terrorising the people and its loyalty to the people of Egypt,” an NSF statement read.

The 6 April Youth Movement also released a statement saying that Al-Sisi’s remarks showed the military was keen on sustaining democracy and achieving the goals of the revolution.

“The current state of political division, brought about by a troubled transitional period and a regime that has failed to achieve national consensus, urges us to appreciate the stance of the current military leadership to stay out of the political scene,” the statement read.

They added that they were against military intervention in politics for the sake of both the military and the country, but supported its “primary national role” as the preserver of security.

“The military and its current leadership are the shield protecting the country against any threat,” said the group’s statement.

Al-Sisi had said that political divisions and insults to the military represent a threat to national security. He called on all concerned to find “common ground for understanding, consensus and real reconciliation to protect Egypt and its people.”