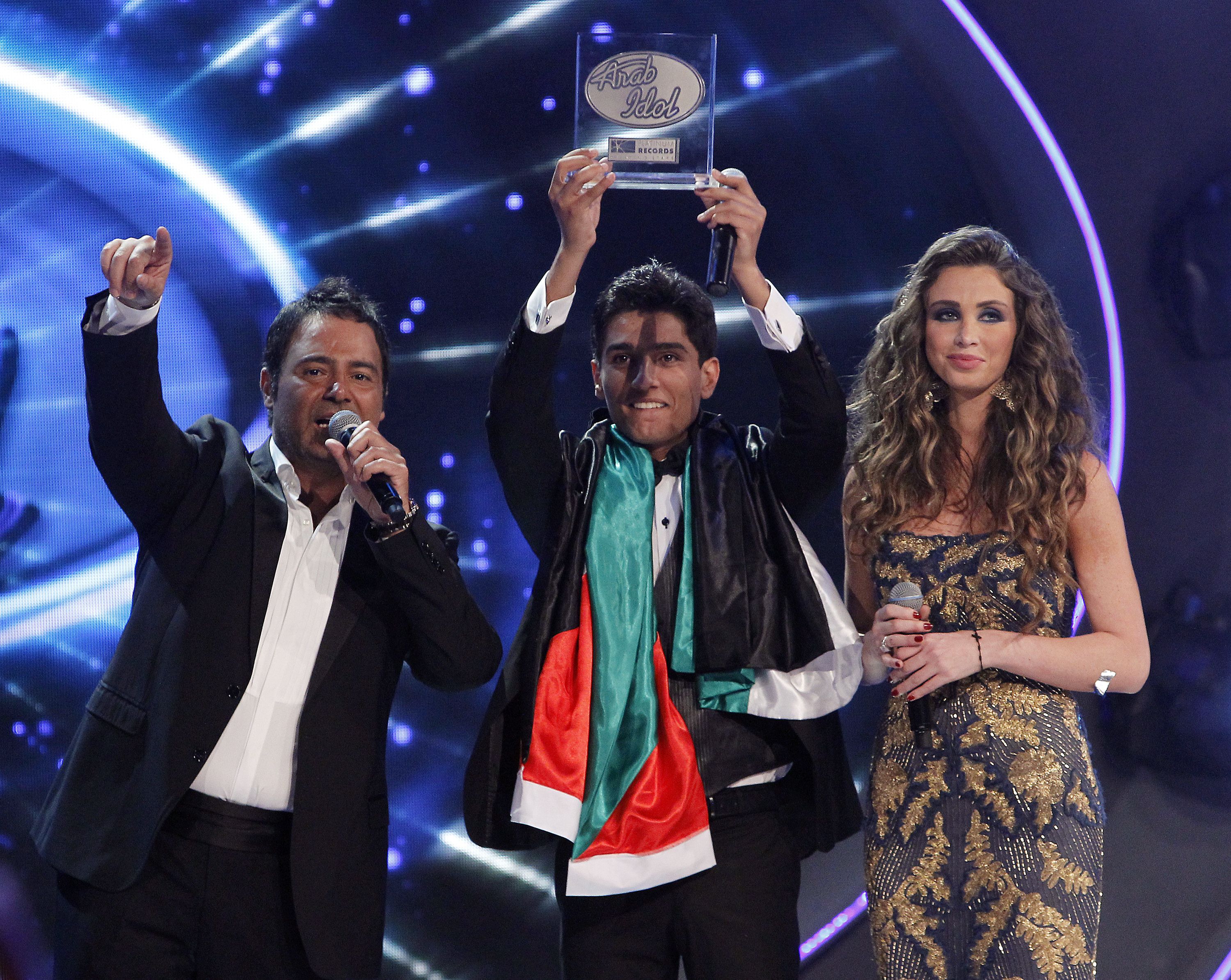 Since the beginning of the second season of the pan-Arab singing competition, hundreds of thousands of viewers tuned in on Saturday nights to watch the results of the elimination episodes. This season, the presence of Kurdish participant Parwas Hussein and Palestinian finalist Mohamed Assaf added a remarkable political twist to the live-aired show, drawing thousands of political comments on various social media networks.  Prominent politicians have weighed in as well; President Abbas as well as an Israeli army spokesperson have comments about the contestants.

Arab Idol is the Arabic version of American Idol, it brought together 13 contestants from various Arab states.  The panel included four judges:  Lebanese singers Ragheb Alama and Nancy Ajram, Egyptian musician Hassan Al-Shafie, and Emirati diva Ahlam Al-Shamsi.  As the winner of Arab Idol this year, Gazan Assaf will sign a contract with a music production company, and receive a cash award and a car.

After every new episode, viewers not only made comments about the competition and its competitors, but geopolitics as well; some endorsed the Kurdish right to self-determination and a separate state from Iraq, and others voiced support for the Palestinian cause.

On 7 June, Lebanese panellist Ragheb Alama announced on the show that he had received a phone call from Palestinian President Mahmoud Abbas, supporting the Gaza refugee and competitor. A few days earlier, Abbas and his Prime Minister Salam Fayyad also phoned Assaf to offer encouragement. Two Mobile phone companies have reduced the cost of SMS voting for Assaf, reported the BBC.  Fayyad publicly announced his support for Assaf on his Facebook page saying, “I call on all Palestinians to support the Palestinian artist Mohamed Assaf, who is deservedly representing Palestine in the second season of ‘Arab Idol.’”

His participation has even drawn comments from the Israeli army; spokesperson Avichay Adraee posted a comment on his Facebook page condemning Hamas for interfering in the internal affairs of Gazans, claiming that the group criticises Assaf’s participation in Arab Idol 2. Assaf replied back to Adraee denying that Hamas has banned him from singing in the competition.

Assaf has over 200,000 followers on Twitter, and his official Facebook page has exceeded 600,000 fans, including thousands of non-Palestinians, many of whom voiced their support for him as well as the Palestinian cause.  Many comments revealed a debate on whether Assaf merited support by Arabs due to his Palestinian nationality or merely because of his natural talent.

Assaf’s song choices on the show were also a source of debate; controversy was sparked after Assaf’s supporters requested that he sing a traditional Palestinian song instead of an Egyptian one. The twenty-three year old Assaf sang repeatedly for Palestine and Jerusalem with a Palestinian scarf around his shoulders. One of his songs entitled “Alli Al-Keffiyeh” or “raise the scarf,” in English, has a clear political message, calling for Palestinian reconciliation and unity.

His nationality was a divisive issue for Egyptians; many debates on various social media platforms showed clashing comments between users, some favouring Assaf and others favouring the Egyptian contestant Ahmed Gamal.  A  non-Palestinian user commented on a YouTube clip of Assaf, saying, “all people support Assaf because he is a Palestinian and people think that they (Palestinians) are living under raids…if they wanted to free their country they could have done that a while ago.” On the other hand, many Egyptians support Assaf for his vocal talent. Rofaida Adel, one of Assaf’s fans on Facebook, said, “There is no discrimination in hobbies and talents because of nationalities. I am an Egyptian and I will support Assaf because he is the best and he deserves the title of Arab Idol. He alone deserves it.” Nana Noona, another of Assaf’s fans on Facebook, replied to posts written by Egyptian users on his page saying, “you Egyptians are mad and jealous that the poor Palestinian has reached the semi-final stages. Go write your comments to Gamal (the Egyptian contestant) on his page not here.”

Liyan Bazlamit, a Palestinian singer from Ramallah, tweeted her support for Assaf, calling him, “the son of Palestine and Gaza,” and asked that fans “let the Palestinian dream come true.” Another Twitter user, with the name Hanady, denounced the fact that some fans have framed the subject in the tight context of nationalism. The user tweeted, “I don’t mind that you support Assaf …, but for God’s sake do not market him on the basis of patriotism.”  Some others have generally condemned the extensive attention given to the singing competition. Twitter user Mohamed Reda criticised those Arabs who, “instead of supporting Syria … are just supporting Assaf and Gamal.”

When Kurdish contestant Parwas Hussein performed Kurdish songs on the show, she was criticised by Emirati judge Ahlam for her Kurdish identity. She said after Parwas’ performance, “I’m against when they always say we support Morocco, we support Iraq, we support Syria, we support the Khaleej … But today, really, I want to send a message of love to Iraq … I’m against when Parwas’ name is written saying she is from Kurdistan, because Kurdistan is part of Iraq and from today, I want you [pointing at Parwas] name to be Parwas from Iraq and not from Kurdistan.” The contestant, who speaks little Arabic, smiled and uttered “Kurdistan of Iraq.”

An article entitled “Arab Idol and Policing Identities” published in the Bil3afiya blog, which tackles stereotypes shaping government policies, describes Arab Idol as one of the competitions which not only provides the contestants with a boost of rapid regional fame, but is also “a platform for nationalism through the process of voting”.  Mona Kareem and Samia Errazzouki, the Kuwaiti and Moroccan bloggers who wrote the article, argue that the Emirati Ahlam’s statements reflect the policies of Gulf Cooperation Council (GCC) countries; these nations “do not have direct relations with Kurdish populations or statements on the Kurdish struggle. …Ahlam’s comments are not simply hers, they are positions propagated by hegemonic discourses that aren’t confined to just punditry, but play a major role in policy-making,” they said.

Highlighting the fact that participants come from different Arabic countries, the fans and their participation show a strong sense of nationalism.  Most of the Kurdish fans supporting Parwas wrote their comments on social media in the Kurdish language, and only a few of them in English. A Kurdish user on Twitter commented on Parwas’ elimination saying: “The only reason people vote for Parwas is because they want a Kurd to win.” Another Kurdish user said: “If Parwas had won Arab Idol, all the Arab countries would be pissed ’cause she is Kurdish [sic].” This inevitably has opened the door for debating the Kurds’ rights in having an autonomous state. An Arab user said on Twitter, “ha-ha Kurds might be able to vote for Parwas but they will never have a country :)”.  KurdishKurd.net, a Kurdish website, tweeted that Parwas’ participation has helped in the promotion of Iraq’s Kurdistan.  However, some fans believed that her presence in an Arabic singing competition was initially unacceptable. “Parwas is out 😉 thanks God. I didn’t want a Kurdish girl to be an Arab Idol [sic],” said another user on Twitter.

The Bil3afiya authors claim that the competition is strongly linked to politics.  They recall the success of last season’s Moroccan contestant Dounia Batma upon her return to her homeland. In Morocco, Batma was singing songs praising the Moroccan King Mohammed VI, and she signed a contract with the country’s biggest telecom company, Maroc Telecom.

Commenting on Parwas’ participation in the show, Egyptian blogger Zeinobia wrote in her blog that her presence has raised the issue of the status of minorities in the Arab world. “This is how things should be and how ethnic minorities should be invited to be included in the society,” she said.

On 9 June the topic of religion entered into the social media debate surrounding the show, following an exchange of tweets between Saudi cleric Mohamed Al-Arifi and the Emirati panellist Ahlam.  The preacher addressed a tweet to Ahlam urging her to depart the world of art and to start being a preacher. “You are a believer and you love God, why don’t you make today a turning point in your life so when Ramadan is here, you are Ahlam the Preacher and not Ahlam the singer?” Al-Arifi suggested to the judge. She responded, saying, “God bless you. Do pray for us, Sheikh Mohammed Al-Arifi. We implore God to accept our good deeds”. This exchange prompted various reactions from many social media users.

Twitter user Majed al-Raisi tweeted, “very normal. I expect Arab Idol to host Al-Arifi to preach to them and then provide Ahlam with a Kalashnikov and ask her to go for Jihad.”  On the other hand, some users praised the tweet exchange; user Khaled Alalkami called it “a beautiful call from Sheikh Arifi and a much more beautiful response from Ahlam.” User BoAbdullah, on Twitter, also praised the conversation saying, “this dialogue which took place between al-Arifi and Ahlam is the epitome of decency. Allah bless both Al-Arifi and Ahlam.”

Another incident on the show that caused debate on social media regarding religion, was a statement made by the Lebanese Judge Ragheb Alama that “God has created the Lebanese singer Fayrouz and broke the mould after.” The singer meant that there would never again be a voice as beautiful as that of Fayrouz, but many users criticised his comment, especially after Ahlam responded to him saying, “God is capable of everything.”

Hundreds of social media users expressed their condemnation towards Alama’s comments with some called him an “infidel”. Twitter user Mohamed Amer wrote posted, “Allah suffices me for He is the best disposer of affairs. How come Ragheb Alama skips the divine power, and claims that there will be no other Fayrouz. Allah suffices. Fayrouz is only a singer not a prophet.” The website of the Kuwaiti newspaper Al-Watan tweeted a response by Alama saying the singer only meant that “the human being himself cannot be created twice by God.” Fan and Twitter user Fatma Hassan defended Alama saying, “yes Fayrouz was not repeated and will not be repeated. May Allah bless her life.  Khalijis and Lebanese people love Ragheb.” Other users sarcastically commented on Alama’s comment. Abu Tareq, a Twitter user, said, “And on your way, God will not repeat the creation of someone like you.”