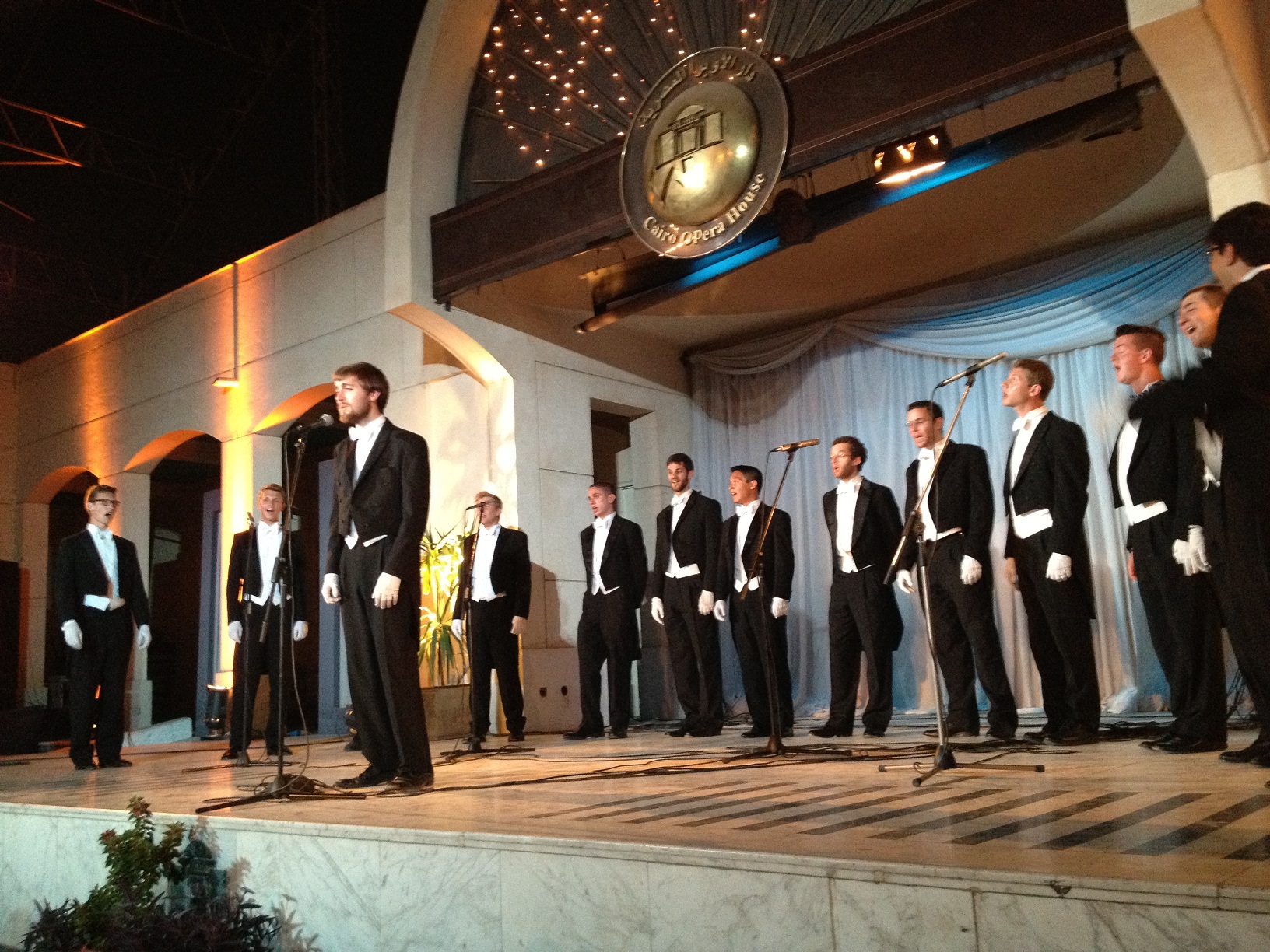 Sunday night was filled with the harmonies of songs from past and present when the all-male choir the Whiffenpoofs performed at the Cairo Opera House. It was the second time that the group, which consists of 14 Yale University seniors, performed for an Egyptian audience. Cairo is just one stop in their 25-country tour, which lasts over three months.

The concert started with a performance by Nathalie Alain and Malak El-Husseiny, two Egyptian singers from Sing, Egyptian Women, a contest organised by the American Embassy in Egypt last year. At the end of the concert, contest-winner Nathalie Alain joined the Whiffenpoofs on stage for a rendition of Roberta Flack’s Killing Me Softly.

We contacted manager and member of Whiffenpoofs, Max Henke, for more information.

Henke explained that Sunday’s concert was a different production than last year’s. “None of us were at the concert in Egypt last year. [The choir consisted of] 14 seniors last year, and we were juniors at that time. All of us are very much looking forward to our time in Egypt, and all of the Whiffenpoofs [who performed] last year recommended that we return to sing in Cairo,” he said.

Henke also divulged that the group decides on their song set only a short while before a concert. “We have some new songs that the group would not have performed last year that we dug up from the repertoire, and some new ones that we have arranged.”

The Whiffenpoofs did not have any concerns regarding visiting Egypt. “We feel that by working with the US Embassy in Cairo and with our contacts at the Cairo Opera House that it would not make sense to pass up the opportunity to visit a place as amazing as Egypt,” Henke said.

The choir is one of the longstanding traditions of Yale University, and Henke explained how the members are chosen. “Every year in March or April, the 14 current members of the Whiffenpoofs watch all the auditions of interested juniors. They must prepare a short solo, sing some warm-ups, sing a quartet with the group, and sing a sight-reading selection. We deliberate over the round of auditions together and unanimously select the 14 members who will be in the group the next year.”

The 14 young men who performed last night all had great voices and entertained the crowd with songs like I Only Have Eyes for You, Too Darn Hot and the Irish ballad Down by the Salley Gardens, which was one of the best songs of the night.

The Whiffenpoofs have enjoyed significant popularity throughout their long history; during the concert, singer Henry Gottfried revealed that Cole Porter was one of the group’s original members 100 years ago and that the choir appeared on the finale of the most recent season of the TV show Glee.

The group will be visiting Greece next in their tour.