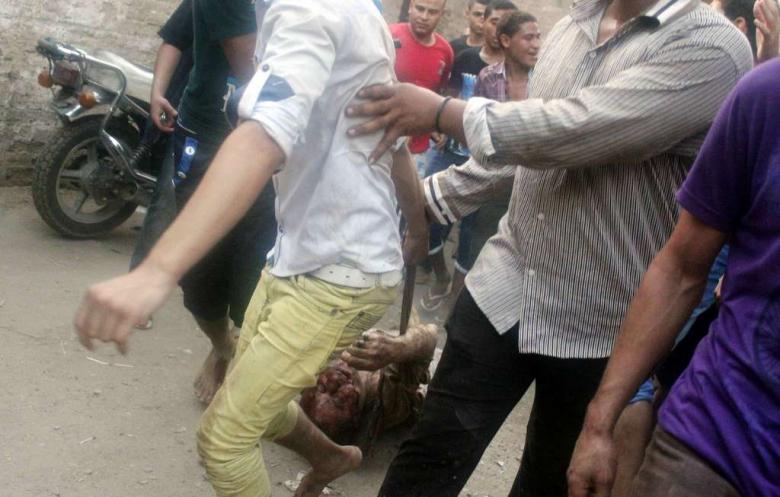 The lynching of four Shi’as Muslims in the town of Abu Mussalam in Giza on Sunday has created tension and heated arguments between political figures and groups.

On Sunday, Sheikh Hassan Shehata, a prominent figure in the Shi’a community, two of his siblings and a student were dragged from a house, through the streets, and killed, while dozens were injured as a result of religious intolerance by residents of Abu Mussalam, in Giza.

Bahaa Anwar, a spokesperson for the Egyptian Shi’a community, said that local residents had cheered the deaths because they believed that Egyptian Shi’as were under the influence of Iran and attempting to convert Egypt’s Sunni majority. Anwar called for human rights activists and the media to “save the lives of thousands of Muslim Shi’as.”

“We called the police, and all they did was watch the massacre and refuse to interfere,” said Anwar.  He added that police officers “knew this would happen, as they wanted Shehata to die.”

Anwar’s plea comes after serious clashes on Sunday night, when an angry mob led by Salafi sheikhs attacked a house where 24 Shi’as were celebrating the night of mid- Sha’ban, a holy occasion leading up to Ramadan. The mob was in search of Sheikh Hassan Shehata, a prominent Egyptian Shi’a.

“3000 people attacked 24 people,” said Anwar. “I blame this on the Salafi Sheikhs who have been inciting against the Shi’as the last two weeks in the village, accusing them of spreading debauchery.”

Anwar said he believes this incident has occurred days before 30 June on purpose, as it marks one of the “worst sectarian incidents involving Shi’a Muslims in Egypt [in recent years].” He added, “the Shi’as believe that the Muslim Brotherhood is using them as a lesson to show all Egyptian citizens what will happen to them if they oppose the regime.” Anwar added that “this is also a [tactic] by the Brotherhood to drag the Salafis into joining them in the upcoming protests.”

Ramy Ghanem, a lawyer for the Shi’a victims, said that while he had yet to file the case, he predicted a difficult bureaucratic fight, given the stigma surrounding Shiism in Egypt. Despite this, he noted that “what happened on Sunday was spread throughout all media outlets, and we are planning on [using this to help] get them their rights.”

Ghanem said that the local Shi’a community held a meeting on Monday afternoon to discuss means of securing their own safety. The group plans on holding a press conference after 30 June, where they would ask all political parties to join them. “The conference will be held after 30 June, because the Shi’as do not want anyone to say [these protests] began because of the Shi’as,” said Ghanem.

While public officials urged immediate action after the attack, Islamists and the president’s office only condemned the Abu Mussalam acts indirectly.

The presidency released a statement Monday condemning the Abu Mossalam assault, saying the president “rejected such criminal acts and [would ensure justice is done.]” The statement added that “the state will not tolerate anyone who tries to threaten the security and the stability of the country.” The word Shi’a, however, was absent from the entirety of the statement.

The interior ministry has stated that an investigation has commenced by General Ahmed Helmy, deputy interior minister for public security, and General Abdel Mageed Lotfy, director of security for Giza.

Conservative Salafi Nader Bakkar said that the Al-Nour Party “does not accept such vigilante acts.” At the same time, Al-Nour Party has printed banners against Shi’as.’

Addressing Al-Azhar, leading opposition figure Mohamed ElBaradei said on twitter that “the slaughter of four Egyptian Shi’as is an abhorrent result of sanctioned religious intolerance,” adding that he is waiting for decisive steps from Al-Azhar.

Al-Azhar released a statement on Monday that a meeting will be held to discuss the incident and what steps should be taken.

Grand Mufti Dr Shawki Allam meanwhile said in a statement that these practices are “unusual” and uncharacteristic of Egyptian society, adding that “Islam does not accept such acts of slaughter and murder.” Allam further warned Egyptians of being “dragged into attempts to ignite sectarian strife” in the country.

Mohammed Ghoneim, the leader of Al-Tayar Al-Shi’i, an informal coalition of Shi’as in Egypt, addressed the government, asking them to provide full protection for their community. “The incident that took place in Abu Mussalam is shocking, especially that it happened on the night of mid-Sha’ban,” said Ghoneim, noting that the security forces were aware of this incident and did nothing to stop it.

Responding to the lynching, Misr Al-Qawia Party founder Abdel Moneim Aboul Fotouh said that such “acts of aggression” and “taking the people’s rights to choose what they believe” are “an awful crime,” adding that “all preachers who encourage such acts must be charged.”

In Monday’s Shura Council session, human rights advocates said that “Egyptian blood is a red line no matter what their belief, race or color.” Dr Khaled Ezz Al-Din, who headed the group of advocates, urged security forces to “take immediate and efficient measures to find the attackers and prevent the recurrence of such acts.”

Ahmed Maher’s 6 April Youth Movement, the 6 April Democratic Front, the Egyptian Democratic Party, and Copts for Egypt each released a statement in which they accused Egypt’s political leaders of inaction and held them fully responsibility for the Abu Mussalam crimes. Khaled El-Masry of the 6 April Youth Movement added, “The [government’s] silence towards the [recent] sectarian speech was the main motivation for what happened.”  El-Masry was referring to the Syria solidarity conference attended by President Morsi in the Cairo Stadium, where a Salafi leader had called the Shi’a “filth for insulting the Prophet’s companions.”

The Arabic Network for Human Rights Information (ANHRI), also in reference to the speech, stated that “no one can deny the hatred against religious minorities.”

The Egyptian Organization for Human Rights released a statement where they expressed their concern at the rise of violence in the country prior to 30 June. “The intolerance, extremism and the refusal of other opinions is an obstacle to Egypt’s progress,” said Hafez Abu Saada, the organisation’s head, calling on Al-Azhar to intervene.

US Ambassador to Egypt Anne Patterson offered the US Embassy’s condolences to the members of the Shi’a community, saying “We join the office of the [Egyptian] presidency and the prime minister in condemning this act of sectarian violence and urge calm,” the statement read. It called on the Egyptian government to ensure that the perpetrators of this “heinous” crime are held accountable.