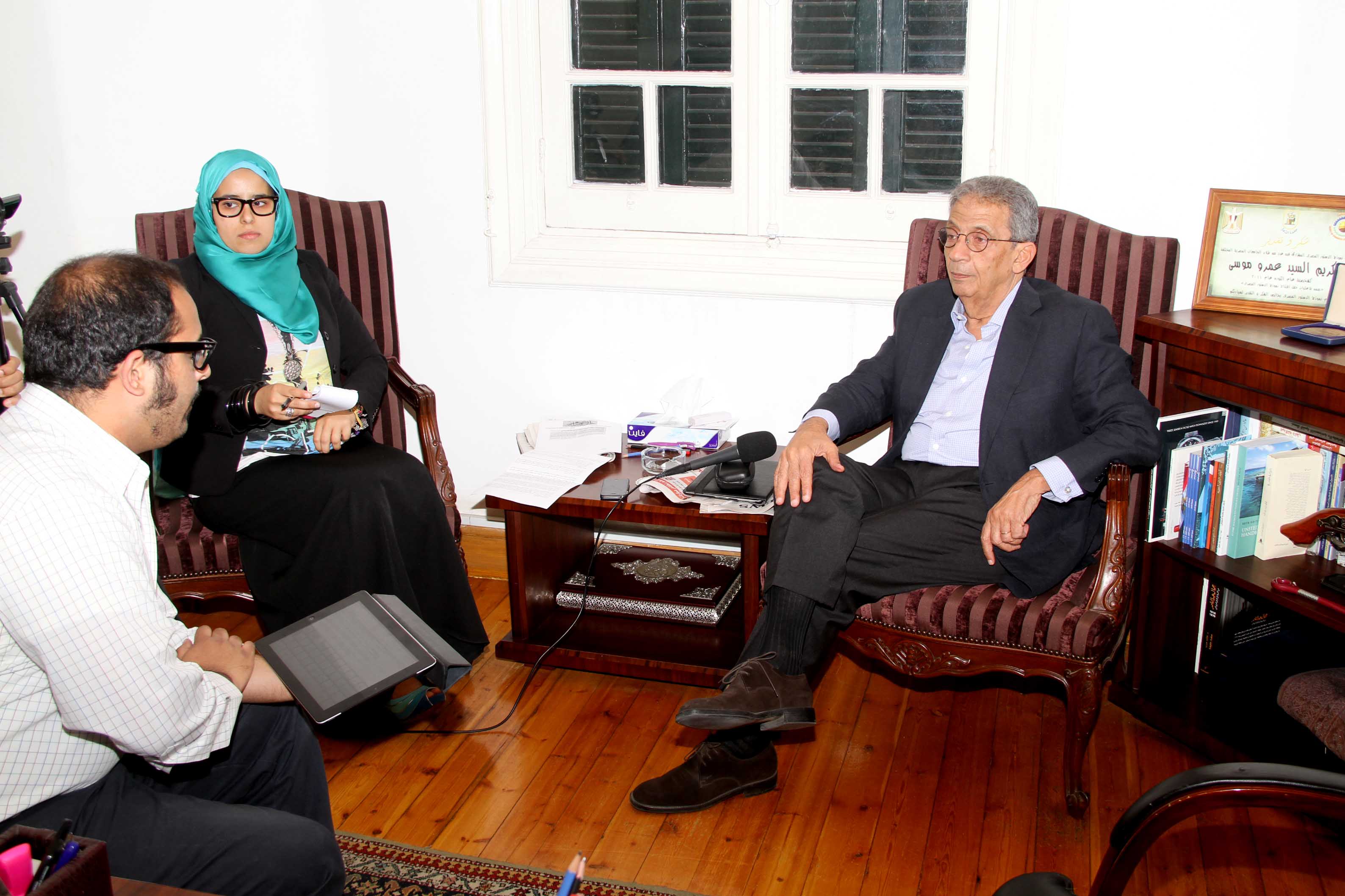 Founder of the Conference Party Amr Moussa is a leading figure in the National Salvation Front (NSF), which announced its participation in protests on 30 June calling for early presidential elections. The former Minister of Foreign Affairs and secretary general of the Arab League discussed President Mohamed Morsi’s performance, opposition plans beyond Morsi, and the NSF’s internal affairs in an interview with Daily News Egypt before 30 June demonstrations

What are your thoughts about President Mohamed Morsi’s speech on Wednesday and his call to form a committee to oversee constitutional amendments?

It was a speech, in my opinion, that created many negative responses. He, as the president of the republic, engaged in “name calling.”

The issue of the [constitutional] committee was just routine talk. All of these calls bring nothing new.

He didn’t speak about all of any of these important issues. He didn’t place before the citizens the next steps.

The situation is inflamed, and 30 June will be a different and important day because there is a large outcry from the people… that there is something wrong. The difference between us (as an opposition, the people, and citizens) and the government is that the government sees that behind all this there is a conspiracy. [The government thinks] the people must be following money. But we are going out [to protest] in anger with the state of Egypt, we are angry at what we see in this country and we are angry because the indicators are all regressing.

If the protests are successful, how do you see the following transitional period?

I foresee that in this situation, the head of the Supreme Constitutional Court would serve as a “symbol of the state”, that the Armed Forces would oversee internal and external security, and that a technocratic government would oversee the [economy] and deal with urgent economic issues. The transition would be short. I am against a long transitional period. A short one would last six months, after which there would be an elected president, an elected House of Representatives, and an objective constitution.

We have six months maximum to deal with the constitution, presidential elections, and parliamentary elections at its end. The government would economically oversee the country during the transitional period.

In terms of an economic plan, what steps should be taken in a transitional period if Morsi were to leave?

The most important thing is the budget is currently agreed upon. The first thing a new government would [do is to] assess this budget and then work with the IMF.

I think we need a prime minister who understands the economy and its relationship with the current financial situation and large projects, prices, and unemployment. The minister of finance is the most important minister in the cabinet. We can’t bring someone who isn’t experienced in economic matters and hides under a chair when the IMF is mentioned.

I see it is in the benefit of the country for the prime minister to understand how to manage the state and all of its aspects, including the budget.

The minister of finance is an extremely important position and it requires someone with experience and who is well-known and respected.

In the face of rising violence throughout different governorates, the Freedom and Justice Party (FJP) has accused the NSF and Tamarod, mentioning you by name in a statement last week, of spreading violence and chaos.

Amr Moussa: The name of the game isn’t violence. The name of the game is the anger of people, the frustration of the people. If the party you mentioned considers any protest or criticism as violence, then they are missing the point. The point is there is a state of [denial] in many circles in the government and the parties supporting the regime that criticism, protests, anger, frustration are all man-made and does not express the real situation in the country.

Amr Moussa: Absolutely, we insist on the peaceful nature of the protests on 30 June and the days after.

And given General Abdul Fatah Al-Sisi’s comments earlier this week , how to you anticipate the army’s role if things do escalate?

Amr Moussa: First of all, it is good that the army decided it would step in and protect all national and governmental institutions and buildings. We don’t need destruction of the state or the symbols of the state. In any case, we are talking about a peaceful day [30 June], but a day of strong protests in which people are standing firm in support of Tamarod’s demand for early [presidential elections].

But the intervention of the army has two functions. First, to maintain security and peace, and second, to intervene in politics. I don’t think the army [wants to do this]. What the army said in its statement a couple days back is that they cannot accept the collapse of the state, but they are going to protect the right of the people to freely express their views. So, this balance is very delicate and is good for the country.

There are discussions about the NSF bringing former members of the dissolved National Democratic Party(NDP) into the fold, and as Mohamed ElBaradei recently pointed out, there are around two million members. Do you think there should be some sort of vetting process when determining with whom to engage?

Amr Moussa: We are all Egyptians, and we are all protesting. We are all angry and we are afraid that our country and our state will collapse. We shouldn’t differentiate between generations. [As for] this question of “feloul”, this was an expression created by the Muslim Brotherhood and many of [the media] just ran with it. But the fact remains that in the presidential elections in the second round, almost 13 million people voted for the other candidate [Ahmed Shafiq]. Those people are Egyptians, and you cannot discredit them because they have a different point of view. This doesn’t necessarily mean the return of the previous regime. This is out of the question. [So are] claims the NDP is back; the NDP is not back. But the members of NDP are also Egyptians, and unless there are certain accusations or certain cases for one or two, or 20, or 100, you cannot accuse millions and exclude them. They were not ruling, they were members – members in the villages, governorates, [and so forth]. We are for all Egyptians, and exclusion is a bad policy.

We are living a new and different era. [There is all] this paranoia about the previous regime coming back. We have to have confidence in ourselves, and I don’t buy these arguments that the NDP is coming back. It’s not coming back. This is being said as a way of making the people afraid and hesitant. But I’m not of this opinion at all.

Are there current disagreements within the NSF? How did the group react to your meeting with [Deputy Supreme Guide of the Muslim Brotherhood] Khairat El-Shater?

There have always been differences; it’s like a canvas made up of different colours. We are insisting that it continues [like this, though]; it’s fine to have different viewpoints. They had a point of view in my meeting with El-Shater, and I had a different viewpoint. When we meet with FJP leaders, it is not right to say that this one is right to meet and this is wrong. It is illogical.

What if this meeting had been presented to the NSF first?

We do not need permission. In political life, there is freedom of movement as long as we agree on the main points.