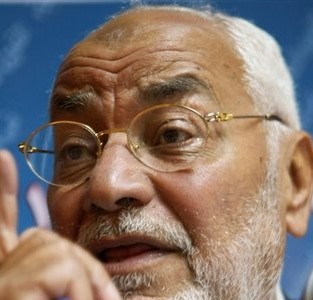 A judge was assigned to conduct investigations into a complaint against former Supreme guide of the Muslim Brotherhood, Mohamed Mahdi Akef.

State-run MENA reported on Monday that Judge Tharwat Hammad and his team were assigned to run the investigations, which are expected to be held within the next few days.

Akef is being investigated because of an interview he gave to the Kuwaiti news service Al Jarida in April, in which he allegedly said “men of the judiciary are standing in the way of the president.”

Brotherhood lawyer Mahmoud Abul Enein said, “It was never the case that Akef insulted the judiciary.”

Akef has denied that he gave the interview to Al Jarida, reported the website of the state-run Egyptian Radio and Television Union.

Al-Jarida, in turn, has provided an audio recording of the interview, available on YouTube, in which Akef can be heard to say: “The judiciary is corrupt…”

On its website, the newspaper said that it was astonished that Akef denied their interview, adding that it has chosen to not publish several of Akef’s remarks because of the volatile political situation in Egypt.

Al-Jarida said the interview was conducted by Amr Hosny on Sunday, 31 March inside Akef’s office.

On 10 April, state-run Ahram reported that an Alexandria-based lawyer filed a complaint against Akef for attacking the judiciary.