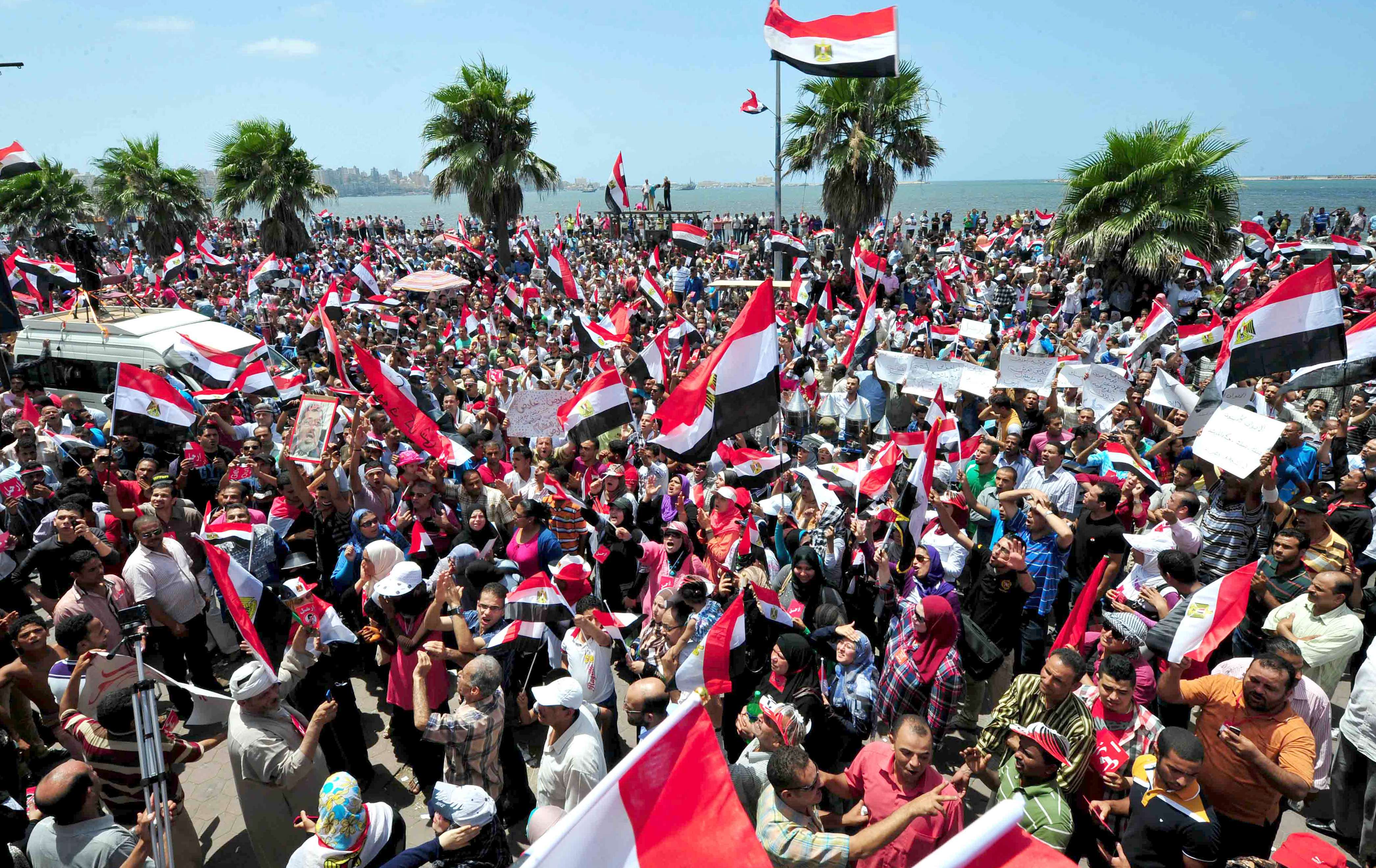 Sixteen were killed and 781 injured after clashes in governorates across the country since demonstrations began Sunday, according to the Ministry of Health.

Of those killed, the ministry said nine died at the Muslim Brotherhood Headquarters in Cairo, three in Assiut, and one each in Beni Suef, Fayoum, Kafr Al-Sheikh and Alexandria.

Ra’id estimated 100,000 present at the governorate building sit-in. He said clashes broke out between after a group of Muslim Brotherhood supporters attacked the opposition march with firearms and clubs.

“One of the thugs broke into a shop owned by a local activist and [vandalised] it,” Ra’id added.

Meanwhile in Beni Suef, local resident and 6 April member Ehab Khater said the opposition march there had turned around to avoid a rival Islamist march, but were subsequently shot at by the owner of a local cafe in an attempt to disperse them.

“Once we were at Modereya Square, the Islamists tried to enter the square, firing bullets and birdshot at the protesters. Not less than 100 people were injured,” he said.

Khater said the clashes led to one of the Islamists being shot, although he is unsure of the circumstances.

“Some people said it was friendly fire, others said it was from one of the townspeople,” Khater said, adding that the protesters were both “unarmed and peaceful,” and estimating the numbers at Modereya Square at approximately 35,000.

In Alexandria, Yossry Al-Sayed, media officer of the Egyptian Socialist Democratic Party (ESDP) and correspondent for Al-Sout Al-Araby, died of heart failure, according to state-owned Al-Ahram. The ESDP told the paper that Mos’id was attacked by Muslim Brotherhood supporters while he was sitting at a cafe; however the Alexandria Security Directorate denied he suffered injuries.

Alexandria Al-Dostour Party member Haitham Al-Hariri said the protests were peaceful, however, with “no clashes” occurring.

“This was the biggest protest in Alexandria in the past two and a half years since the revolution began,” he said.

The city also witnessed a funeral procession for Brigadier General Mohamed Hany, police inspector in North Sinai, attended by several thousand. Hany was killed in a drive-by shooting in Al-Khalafa in Sinai on Saturday.

Although one was killed in the Kafr Al-Sheikh governorate, lawyer and activist Ahmed Ashour said that the “between 40,000 and 60,000” protesters gathered at the governorate building in the city Kafr Al-Sheikh had remained peaceful.

“People know that the area is full of hunters with a lot of weapons, so no one would dare to do anything,” Ashour said, noting that at the only point where chants had turned aggressive, the governor had exited the building through a back door and left in a pickup truck.

In Gharbeya governorate, tens of thousands of protesters gathered in Mahalla and Tanta, according to Al-Dostour Party members Moustafa Ali and Moustafa Amer, who emphasised the peaceful nature of the demonstrations in the two cities.

Both stated that in their respective areas, the number of people on the streets had exceeded those during the ouster of former president Hosni Mubarak on 11 February 2011.