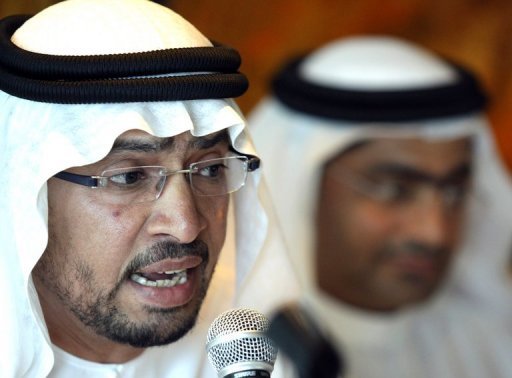 AFP – A UAE court Tuesday sentenced 69 Islamists to jail for up to 15 years on charges of plotting to overthrow the government, at the conclusion of a mass trial criticised by rights groups.

Amnesty International slammed the verdicts, saying the trial was “grossly unfair” and the charges were “bogus.”

The Federal Supreme Court sentenced 56 of the 94 defendants to 10 years in prison each, the official WAM news agency said.

Among the 56 is Sheikh Sultan bin Kayed Al-Qassimi, a member of the ruling family of the emirate of Ras al-Khaimah, WAM said.

Five defendants were jailed for seven years each while eight tried in absentia were sentenced to 15 years each, it said.

A total of 25 people were acquitted including all 13 women arrested in the crackdown and who had been on bail since the start of the trial on March 4.

Prosecutors say the accused are linked to the Al-Islah group, which has ties to the Muslim Brotherhood. Political movements are banned in the UAE.

“Not only do the defendants appear to have been targeted simply because of their views, but they have been convicted on bogus charges and denied the basic right to a fair trial,” said Hassiba Hadj Sahraoui.

“The only thing this trial shows is the fundamental flaws in the UAE justice system,” she added.

According to Amnesty the trial “was marred by allegations of torture which were blatantly ignored, the rights of defence were flaunted, and independent observers were banned from the court room.”

The London-based watchdog pointed out that the convicted men have no right to appeal.

“The slick PR of the UAE is enough to hide the fact that the trial was grossly unfair and that fundamental rights have been recklessly disregarded,” said Hadj Sahraoui.

Their trial was the largest in the history of the UAE, which has not seen any of the widespread pro-reform protests that have swept other Arab states, although authorities have cracked down on dissent and calls for democratic reform.

The defendants, among them lawyers, university professors and students, were arrested between March and December 2012 for allegedly plotting to overthrow the government.

Only selected relatives of the defendants, local journalists and representatives of human rights groups were allowed to attend the trial at the country’s top security court.

Several rights groups including the International Federation for Human Rights, voiced concern that the only international legal observer mandated to attend the last session of the trial, Melanie Gingell, had been denied access to the hearing.

“This denial puts the UAE in breach of a United Nations General Assembly resolution adopted in 1999 requiring states to allow trial observations to monitor whether international standards of fair trials are adhered to,” said the groups in a statement.

They also urged the UAE to investigate the defendants’ torture allegations.

State media has repeatedly lashed out at foreign criticism of the trial and has also criticised Arab Spring uprisings.

A US State Department report in April said the UAE has significant human rights problems, including “arbitrary arrests, incommunicado detentions and lengthy pretrial detentions; limitations on citizens’ civil liberties… and citizens’ inability to change their government.”

The UAE dismissed the report as “unbalanced” and insisted that it was committed to bettering its rights record.

UAE attorney general Salem Kobaish in February said the defendants had set up a secret organisation “aimed at opposing the basic foundations on which the state’s political system is built and at seizing power” which had ties to individuals and organisations outside the UAE, including the Muslim Brotherhood.

On June 19, the UAE authorities announced they were charging another group, comprising 30 Egyptians and Emiratis, with setting up an illegal branch of Egypt’s Muslim Brotherhood, in a case linked to that of the 94 Islamists.