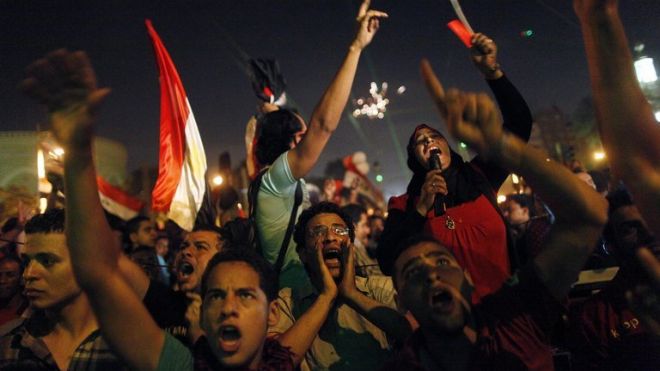 Protesters shut down the Port Said Investment Authority on Wednesday as a form of civil disobedience, said a local activist.

Qandil, a well-known activist and accountant at the local electricity company, was let out of work early today, he said, in response to nationwide protests.

In Qaliubiya, Al-Dostour Party member Waleed Mohamed said that the main governorate building in the capital Banha has been closed since Friday.

Mohamed qualified: “we’re not trying to close things that may cause problems to people such as water and electricity facilities.”

He said that the sit-in at the governorate building has been going on since Friday, and although originally directed at the new governor, they are now “against the entire regime,” and would continue “until the fascist Brotherhood regime is removed.”

Ahmed El-Naggar, another local Al-Dostour Party member, said that even the employees from the governorate building sympathised with the protesters, and approximately “100 to 200 employees” had joined the protests.

“This is the main building that controls all of the other facilities below it; this symbolises the governorate as a whole,” El-Naggar explained. “Once this was closed, the rest [of the government facilities] slowed down.”

He added that all of the political parties and groups agreed upon the civil disobedience. “We’re not leaving until Morsi is not only removed, but also put on trial for what he has done,” he said. “This will be a message to all future rulers that if they don’t respect us, this will happen to [them] too.”

Several political parties and groups have called for widespread civil disobedience, including Tamarod, Al-Dostour Party, and the Center for Trade Union and Worker Services.