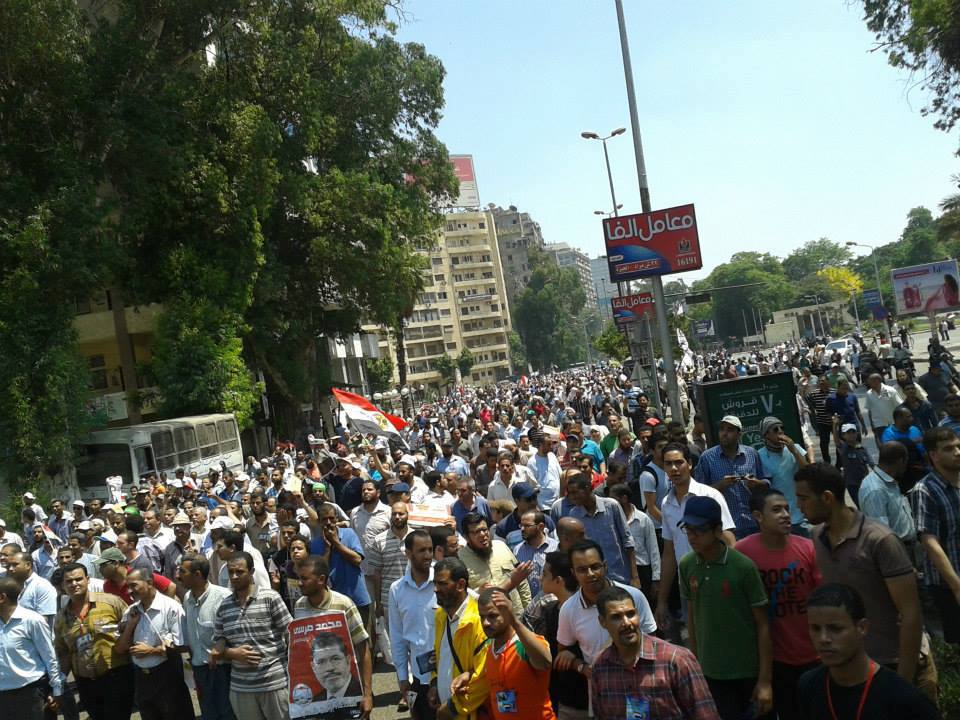 Former president Mohamed Morsi’s supporters have taken to the streets across various cities to announce their rejection of Morsi’s ouster.

Muslim Brotherhood spokesperson Ahmed Aref dubbed this as the “Friday of Rejection” on his Facebook account. Aref said this is the Friday of rejecting the coup, rejecting the return of the (now defunct) National Democratic Party and the rejection of attempts to destroy the path of democracy.

The protest comes two day after Defence Minister Abdul Fatah Al-Sisi announced a roadmap which included the swearing in of the head of the Supreme Constitutional Court, Adly Mansour, as interim president and early presidential elections.

The pro-Morsi demonstrators gathered across the nation including in Cairo, Giza, Alexandria, Ismailia, Minya, Suez, and Damietta, to announce support for Morsi’s legitimacy. Chants included: “the Egyptian Army is our army and Al-Sisi betrayed our president.”

The Brotherhood said that its protests are peaceful and called on the army and police to protect the protesters.

Ikhwanweb, the Brotherhood’s English Twitter account, said a large number of protesters are heading towards the headquarters of the republican guards, where soldiers allegedly killed several protesters earlier on Friday.

Senior Brotherhood figure and member of the Freedom and Justice Party’s executive bureau Mohamed Al-Beltagy said on Facebook: “Morsi will return to the palace today.” He added that intimidating the protesters through live fire will not work.

Tamarod spokesman Hassan Shahine said that these protests are a naive attempt by the Brotherhood to seek strength from the West, especially the United States.

Shahine said Morsi is a former president of Egypt “because of the will of the people….It was a popular demand”.

He believes that Morsi’s ouster was not by military coup.

Shahine also said it is important now for protesters to remain on the streets to celebrate the victories and maintain them.

The NSF added that remaining in the squares until the completion of the procedures of the transitional phase will send a message to the whole world that Egyptians are proud of their revolution.