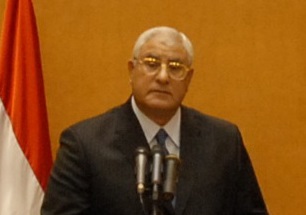 Reporters Without Borders called on Thursday on President Adly Mansour to quickly implement the roadmap.

Defence Minister Abdul Fatah Al-Sisi announced a roadmap on 3 July to lead Egypt out of its current crisis. The roadmap included the suspension of the current constitution; the swearing in as temporary head of state, the head of the Supreme Constitutional Court Mansour; early presidential elections; the formation of a caretaker government and the formation of an inclusive committee to review the proposed constitutional amendments on the temporarily-suspended constitution.

The non-profit organisation said quickly implementing the roadmap would be so that Egypt “does not have a repeat of the authoritarian rule by the Supreme Council of the Armed Forces.”

It added that what Egypt needs now is a constitution that respects human rights and freedom of information, and that amendments to the constitution should neither directly nor indirectly give the army “excessive powers.” Reporters Without Borders described former president Mohamed Morsi’s ouster as a “military coup with civilian trappings.”

The freedom of information organisation said it was alarmed that shutting down several religious channels was among the first steps taken by the new authorities. The Muslim Brotherhood-owned Misr 25, along with other Islamist channels such as Al-Hafez, Amgad and Al-Nas were taken off the air following the announcement of the roadmap. The channels openly supported Morsi.

Reporters Without Borders described the move as “disturbing” and called for re-opening the channels. It also condemned the raid of Al-Jazeera Mubasher channel and the arrests of some of its staff.