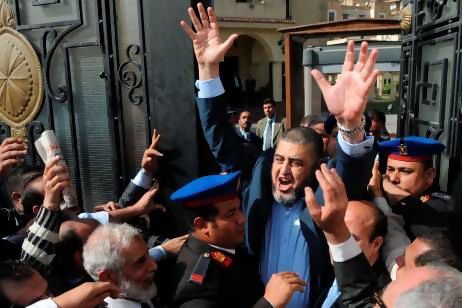 Latif said that El-Shater and Ismail are both accused of inciting violence in Moqattam and Bein El-Sarayat areas.

Abu Ismail was arrested on the 6th of October Bridge at approximately 10pm on Friday, on his way to Rabaa Al-Adaweya Mosque, Latif stated, while El-Shater was arrested in Nasr City around 12am.

The weekend saw a number of arrests of prominent Islamists, following the 3 July announcement of the army’s ouster of Mohamed Morsi from the presidency.

According to state-run Al-Ahram, Freedom and Justice Party (FJP) member Saad Al Katatny, who was the speaker of now-dissolved parliament, and senior Brotherhood leader Mohamad Rashad Bayoumi, are both being held in Tora prison.

The FJP Media Office said that senior members Helmy Gazar and Gamal Heshmat were arrested on Friday night, and that their current location is unknown. Despite earlier reports of Brotherhood Supreme Guide Mohamed Al-Badie being arrested, he spoke to tens of thousands of supporters from the stage at Rabaa Al-Adaweya on Friday.

According to Al-Ahram and Ikhwanweb, former Brotherhood Supreme Guide Mahdi Akef was arrested as well.

The trial of Brotherhood lawyers Naser Salem Al-Hafy and Abdul Moneim Abdul Masoud on charges of insulting the Supreme Constitutional Court has been postponed until October, Al-Ahram reported.