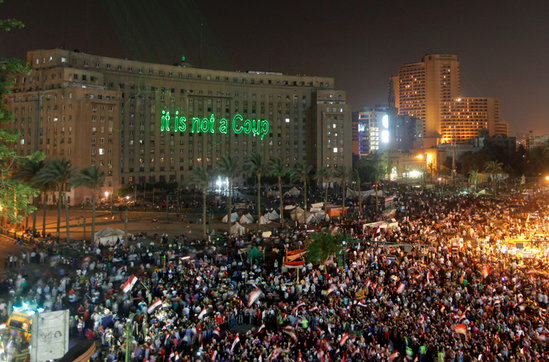 The green lasers that lit up the skies and all that hovered in them during the recent demonstrations have a big brother. During the recent protests in Tahrir Square, a large green laser projected images and words on the towering face of the Mogamma building on the side of the square.

Phrases like “Leave!” and “Egypt,” written in both Arabic and English, adorned the facade in the evenings as masses flocked to the square, and provided a background to the chanting of the protesters.

3 July came and went, and crowds still kept gathering in Tahrir. A new phrase was added to the display, generated by the mother of all green lasers, sending a clear message to all those who had been vigorously debating what to call what had taken place on Wednesday.