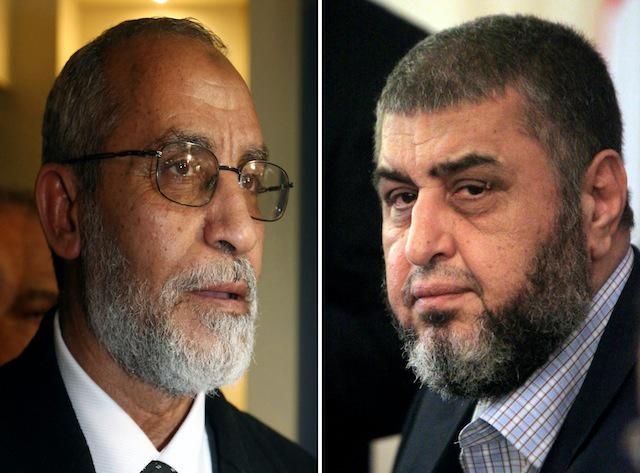 The public prosecution ordered on Saturday the detention of four senior leaders of the Muslim Brotherhood on charges of inciting violence which resulted in the killing of anti-Morsi protesters outside the group’s headquarters in Cairo.

On Sunday morning, prosecutors ordered the arrest of senior Brotherhood member Mohamed El-Beltagy, preacher Safwat Hegazy and vice-chairman of the Brotherhood Essam Al-Erian on the same charges, following the killing of nine people by live ammunition at the Islamist group’s headquarters in Moqattam on 30 June. The building was later torched and ransacked.

In an official statement, the FJP qualified these detentions as being part of “state-sponsored terror campaigns” initiated after the army’s “full-fledged coup”. It denounced “a vengeful campaign of arbitrary arrests” based on “fabricated charges, a campaign of raids and repression of pro-democracy supporters.”

It accused the “beefed-up security apparatus” of raiding the homes of Brotherhood leaders, including Akef, who was later arrested.

“Mubarak’s dawn visitors, thugs and the military heroes honored us with a night visit to achieve national reconciliation in accordance with the road map of the bright future,” said Ibrahim, the son of Al-Erian.

The FJP statement rejected “the rumours” alleging the arrest of Supreme Guide of the Muslim Brotherhood Mohamed Badie and El-Shater, despite the “continuing security effort to arrest them” in the “wave of persecution and blatant crimes” against the Brotherhood.

Sources in the prosecution of south Cairo assured the arrest of El-Shater on Friday, along with Hazem Salah Abu Ismail, as well as ongoing investigations on him and Akef.

Yasser Mehrez, Brotherhood media spokesman, said in a statement: “The campaign of arrests and night raids by security forces drags Egypt back long decades. Everything the people fought for is being lost and wasted right before our eyes.”

He also called on all state institutions, the army, Al-Azhar and the Church to “stand firm against the suppression of freedoms,” and to stand at the same distance from “all the sons and daughters of this homeland, without bias for one party or another and to be the guardians and protectors of the interests of Egypt.”