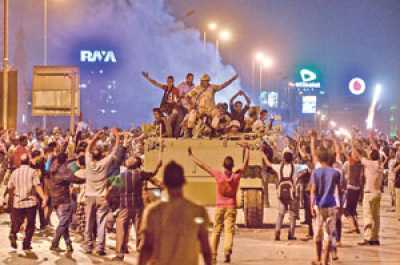 The Observers to Protect the Revolution, a national coalition of Egyptian human rights groups, issued a statement on Sunday condemning the violence used against peaceful protesters on Friday.

The statement said that security forces used violence against peaceful protesters at demonstrations on 6th of October Bridge, in front of the Republican Guard Club and other locations around the country, which resulted in the death of 30 Morsi supporters and the injury of 1300 on Friday and Saturday.

“The coalition assures that expressing oneself in a peaceful way is a right that is secured by all international human rights norms and agreements, including the Universal Declaration of Human Rights, the International Covenant on Civil and Political Rights and the 2012 constitution,” said the statement.

It claimed that such violence not only “hurts freedom of expression in the country, but also the democratic transition and the future of Egypt,” adding that it affects national security negatively, which increases the risk of a civil war.

The statement also called on the people to unite in such times “to get out of the black tunnel that the country has entered,” claiming that after the January 25th Revolution, Egyptians were given “their rights and freedoms back and will not accept any deterioration in those areas.”

The coalition demanded the reconsideration of the use of violence against peaceful protesters, as well as the need to provide them with the appropriate protection.

It also demanded the release of political prisoners, which include the head of the Sawaseya Centre for Human Rights and member of the National Council for Human Rights Abdel Moneim Abdel Maqsoud.

Mostafa Al-Hadda, a lawyer at Sawaseya Centre, said that Abdel Maqsoud was arrested on Thursday while attending the investigations of Saad Al-Katatni, head of the Freedom and Justice Party.

Al-Hadda added that Abdel Maqsoud was accused of inciting to kill protesters at Al-Nahda Square, adding that his detention was renewed for an additional 15 days on Saturday.

The statement concluded with the demand to reopen the TV channels and newspapers that were shut down following the ouster of Morsi.