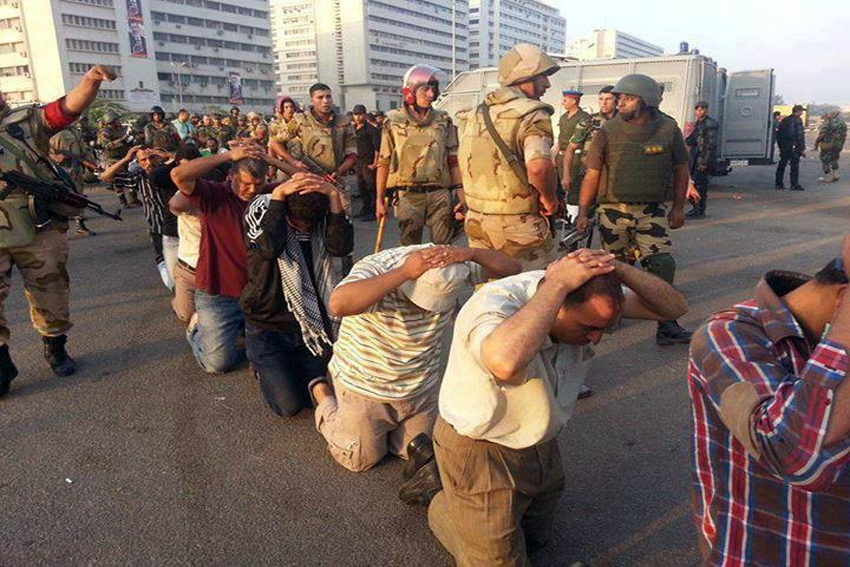 At least 51 died and 435 were injured outside the Republican Guard headquarters in Salah Salem in clashes between 4 and 5 am Monday morning.

At time of press, facts remain unclear as to what exactly transpired at the Republican Guard sit-in; conflicting reports are coming from the army as well as the protesters regarding who instigated the attack. The Supreme Council of the Armed Forces announced that it will hold a press conference today to screen videos of the clashes that prove the attack was prompted by the pro-Morsi protesters.

Morsi supporters immediately sought refuge at the Rabaa Al-Adaweya sit-in, a few meters away from the Republican Guard headquarters.

Mohamed Zamaty, a doctor at the Rabaa Al-Adaweya field hospital, said that by 8 am they had received at least nine pronounced dead and four in critical condition. He stated that the wounds were caused by live ammunition, expanding “dumdum” bullets and birdshot.

Pro-Morsi protesters claim that the army and police attacked the peaceful sit-in during dawn prayer, first firing tear gas from both ends of the street and using live ammunition and birdshot shortly afterwards. They claimed that the army initiated fire from the rooftop of the headquarters’ building.

Hatem Mahmoud, 24, who joined the sit-in last night, said that civilian guards at the sit-in’s checkpoint had given a sound of warning as protesters prayed. As some interrupted prayer to survey the area, tear gas came from the side leading to El-Fangary Bridge and from El Tayaran Street. According to Mahmoud, the army promptly fired live ammunition and birdshot as protesters attempted to escape the tear gas.

“They started firing tear gas canisters at us from both sides of the street,” said Mohamed Farouk, another eyewitness. “They then started shooting at us, and there were snipers on the rooftops of nearby buildings shooting at those running toward Rabaa Al-Adaweya. What happened was a massacre by the army and police.”

The military claims that their actions were a response to an initial attack on the Republican Guard by several pro-Morsi protesters. It has been reported by a military source that one soldier died during the clashes and others were injured. Photos of the weapons such as hand-made grenades, machine guns and light arms that the army claimed to have found with Morsi supporters were distributed to the different media outlets.

Some residents of the area also claimed that the Morsi supporters started firing on the Republican Guard and used their rooftops. Others shared their testimonies and photos of what they have witnessed on online venues.

Several protesters allege that army helicopters had dropped flyers on Sunday night at around 9pm warning that the sit-in will be forcefully dispersed if they did not leave of their own accord. Protesters alleged that the flyer said the army “respects legitimacy” but does not “respond to threats.”

Protesters were outraged at the accusation that they initiated the attack. El-Sayed Ibrahim Ansar, a protester, said that it would have been impossible for them to strike the army at the time of the attack.

“The army chose a time when we were most vulnerable, when everyone was tired and awake only to pray,” Ansar said.

Shortly after the attack, the atmosphere in Rabaa Al-Adaweya was sombre and mournful as protesters broke down in tears over the bodies of the dead and injured that were brought to the field hospital. Protesters, armed with wooden sticks, quickly organised into rows in anticipation of an attack on their sit-in. The entrance of the field hospital was crowded by protesters attempting to make their way inside to see if their loved ones were among those injured or dead.

As bodies were transferred into the field hospital, crowds chanted, “Al-Sisi, how are you any different than Bashar al-Assad?”

The Muslim Brotherhood’s Freedom and Justice Party (FJP) released a press statement strongly condemning the attack and calling on Egyptians to “rise against those who want to steal their revolution using tanks, even if it were over their dead bodies.”