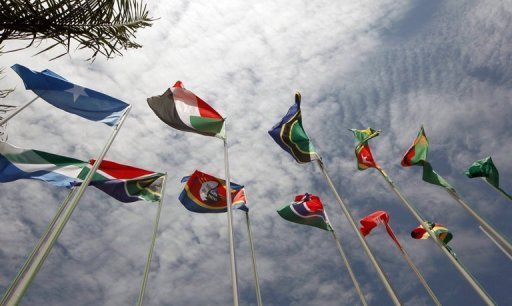 The Federation of Egyptian Chambers of Commerce (FECC) will address federations and unions in 42 African count riesto address the African Union’s (AU) expulsion of Egypt.

Speaking in a press conferenceon Monday, head of FECC Ahmed El-Wakil said negotiations are ongoing with participating chambers of commerce and federations of52 Islamic countries, in addition to those in 23 Mediterranean countries.

Two days after the ouster of president Mohamed Morsi, the AU’s Peace and Security Council suspended Egypt from all union activities.

“What happened is normal,” said El-Wakil, blaming the decision on the political situation, as well as the “ailing economical and service situation.”

El-Wakil asserted that the role of the military is to support the people, and denied that the ouster was a coup.

El-Wakil continued: “We can never ignore the demands ofmillions who took to street across the nationon the 30 June nationwide protests, that should be respected and well understood, aspeople are the source of legitimacy.”

“It iscut and dry that Egypt is the capital of Africa continent,” said Magdy Tolba,an economic expert and head of Arabian Wise,an economic and financial consultancy.

Tolba believed that this suspensionwould be temporary, stating thatit was dictated by AU regulations statingthat onlyconstitutional governments can participate.

He explained further that this decision would have a “sweeping influence” on the Egyptian economy;itmay restrict and inhibitthe mutual trade exchange in a “critical time.”

Moreover, Tolba anticipated that the conflict surrounding the Grand Ethiopian Renaissance dam may be worsened.

On Friday, the official spokesman of the Egyptian Ministry of Foreign Affairs Badr Abdel Atty said in a statement that the decision to suspend Egypt from the AU was based on information that does not reflect reality, nordid it take into account that the events of 3 July.

“The movement by the armed forces came as response to the demands of the people,” he said, adding that the roadmap announced by the military is currently being implemented.