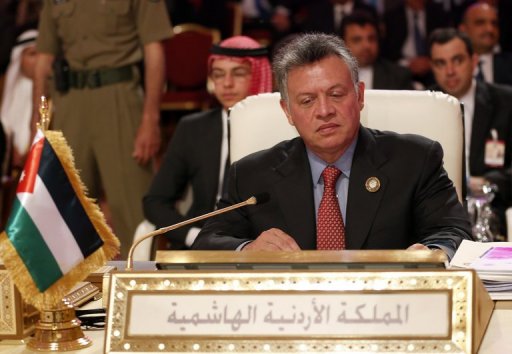 By Mussa Hattar (AFP) – Jordan breathed a sigh of relief when Egypt’s Muslim Brotherhood president was ousted because of the influence of its own opposition Islamists who have pressed for reforms, analysts say.

King Abdullah II and the government were quick to congratulate Egypt’s Supreme Constitutional Court Adly Mansour hours after he was declared caretaker president by army chief Abdel Fattah al-Sisi following Mohamed Morsi’s ouster on July 3, stressing support for “the will and choice of the great Egyptian people”.

“Jordan swiftly and clearly welcomed the ouster of Morsi. Just like Saudi Arabia and the United Arab Emirates, Jordan has a problem with the Muslim Brotherhood,” analyst Oraib Rintawi, who heads the Amman-based Al-Quds Centre for Political Studies, told AFP.

“There is no doubt that decision-makers in Jordan and the regime are relieved now. Even friends of the Muslim Brotherhood in the kingdom are doubtful now about Islamist reform plans.”

Rintawi said opposition Islamists, the country’s main political party, “need to double their efforts to convince people of their credibility, and bridge the gap between them and their traditional allies”.

Moderate Islamist parties from Egypt to Morocco have won major shares of contested seats in elections, reaping the rewards of new democratic freedoms brought by the Arab Spring.

“Following the failure of the Islamists in Egypt, it has become hard for people to believe the talk of the Brotherhood here about pluralism and democracy,” Rintawi said.

In 1946, Jordan officially recognised the Brotherhood as a charity that in 1992 formed its political arm, the Islamic Action Front (IAF), which has never called for an Islamist state in the kingdom.

The IAF is not represented in parliament because the Islamists boycotted a general election in January over what they called lack of reform.

The Islamists have wide grassroots support, and they are tolerated by the regime but their relations with the authorities remain tense.

“Jordan welcomes the downfall of the Brotherhood in Egypt and hopes it will be the end of Islamist power there to get rid of the main opposition group in the kingdom, the Islamists.”

Opposition Islamists in Jordan have staged street protests almost every week since 2011, demanding sweeping political and economic reforms and a tougher fight against corruption.

“The Muslim Brotherhood in the country is weaker now. As a result the regime is in a better situation and faces less pressure,” political writer and columnist Labib Kamhawi told AFP.

“This gives the regime a chance to meet the people’s demands for reform without becoming worried about the influence of the Islamists.”

Zaki Bani Rsheid, deputy leader of the Muslim Brotherhood, shrugged off the criticism.

“The way Jordan quickly welcomed what happened was politically incorrect and unbalanced. It was not in Jordan’s interest and shows that Amman backs military coups and work against the will of the people,” Bani Rsheid told AFP.

The military ouster of Egypt’s first democratically elected president after massive protests calling for his resignation has pushed the divided country into a vortex of violence. In the bloodiest incident, clashes around an army building on Monday left 53 people dead, mostly Morsi supporters.

Jordan’s Islamists have condemned the ouster of Morsi, who was elected in June last year, calling it “a US-led conspiracy”.

Morsi’s first year of turbulent rule was marked by accusations that he failed the 2011 revolution by concentrating power in Brotherhood hands and letting the economy nosedive.

“Jordan is part of this conspiracy. But this will not stop our peaceful reform demands which are not linked to any party outside the country,” Bani Rsheid said.