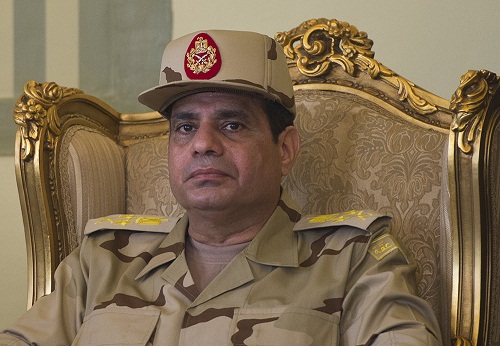 “Our cause no longerrevolves aroundMorsi, the constitution or the Shura Council; it is about [preserving] the minimum of human dignity and human rights,” said the coalition, adding that some Tamarod members recognised that they had been deceived and have joined the NCSL’s cause.

Al-Wasat Party member Hussein Zayed demanded Al-Sisi’s removal, accusing him of having planned the “military coup” and explaining that his removal would solve all the country’s problems. He added that the NCSL protesters will remain in the streets until “democracy takes its natural path even if it will cost (them their) lives.”

Governor of Kafr Al-Sheikh Saad El-Husseiny claimed that 500 were arrested in Ramses Square Monday by “unknown assailants” collaborating with the police. Such collaboration, he said, poses “an extreme threat to Egypt’s future.” He added that “hundredsof thousands” had gathered in Ramses Square, including youth, to peacefully protest, however they were attacked with tear gas while praying and then were victim to“massive strikes from the 6th October Bridge for three hours until midnight, when the police started shooting them with birdshot and live gunfire.”

Human rights commission agent Ezz El-Komy condemned the alleged arbitrary arrests at Ramses Square, the “assault and torture” of peaceful protesters, media censorship, the shutdown of political parties’ headquarters, and Morsi’s detainment. He said that the commission asks for a public appearance of Morsi to ensure his safety as well as forming a medical and legal commission to inquire about his condition.

The NCSL hosted some pro-Morsi protesters on stage, who were heavily injured, accompanied by Dr Hisham Ibrahim, who stated that 647, including 4 women, were injured in the past two weeks’ protests and seven died, excluding those involved in the Republican Guard clashes, where he claimed “111 died and 1000 were injured.”

This differs from the official count of 57 killed and 480 injured.

Members of the dissolved Shura Council were also present, demanding the formation of an independent commission to investigate in the Republican Guard clashes and condemned the violence practiced by the state security apparatus as “similar to that of the Mubarak regime.”