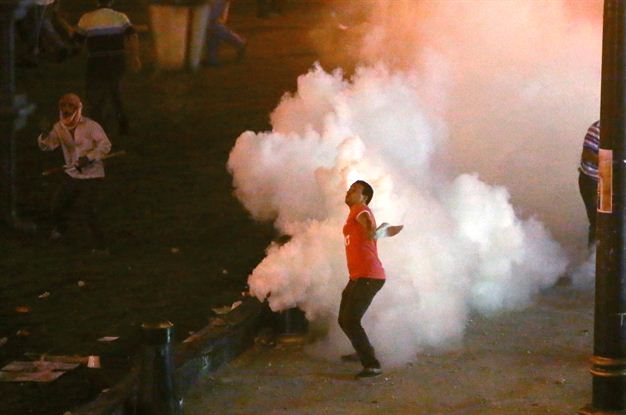 Fresh outbreaks of violence erupted on Monday night at Cairo’s Ramses Square on the 6th of October bridge, where four people lost their lives on the 5 July, and at Al-Nahda Square in Giza, the site of an ongoing sit-in by Muslim Brotherhood supporters.

Reports released by the Health Ministry suggest that seven were killed and 261 injured in the clashes which erupted at around 8.30pmand continued until the early hours of Tuesday morning.

Dr Khaled Al-Khatib, a health ministry official, told state-owned Al-Ahram that 137 patients had already been discharged from hospitals and that the remaining 124 were still receiving treatment.Clashes in Ramses Square and on the October Bridge left two dead and 134 injured, Al-Ahram quoted Al-Khatib as saying, and that five had been killed and 114 injured in Al-Nahda Square and around Cairo University.

A total of 19 members of the security forces had been injured in the Ramses Square clashesand at least seven of those wounded had been admitted to hospital after being hit with birdshot, Al-Ahram reported.

A statement issued by the Ministry of the Interior late on Monday night claimed that a number of Brotherhood supporters gathered in Ramses Square and attempted to block traffic. At the same time, another group of supporters of ousted president Mohammed Morsi made their way onto the 6th of October Bridge and began to “throw stones at cars” the statement claimed.

Security forces warned demonstrators, the statement continued, but when they did not comply tear gas was fired onto the bridge to disperse the crowds. Demonstrators responded by throwing stones at security forces, which resulted in more volleys of tear gas, an AFP reporter at the scene noted. Al-Ahram reported that violence also broke out in the Ghamra neighbourhood, close to Ramses Square, where Brotherhood supporters and local residents reportedly fired birdshot at each other.

Mohammed Soudan, a spokesman for the Freedom and Justice Party (FJP), the political arm of the Brotherhood said around 2,000 “thugs” had been “released by the police into the crowds of peaceful protesters”, who had marched to Ramses Square to demand the reinstatement of the ousted president.

Mahmoud Zaqzouq, from the FJP Media Office,said a number of Brotherhood supporters had been arrested by the security forces around Ramses Square, however he was unable to specify how many had been detained or the circumstances of their arrest.

Clashes also erupted in Al-Nahda Square close to Cairo University, leaving 37 injured and five killed, according to armed forces spokesman Ahmed Ali. Ali added that the majority of the injuries were caused by birdshot and live ammunition. Citing a security source, a statement released by the Ministry of the Interior claimed that a man had been dragged from his car and fatally beaten close to Giza Square. On this point, Ali said that the crowd’s reaction came in response to the driver running over a protester. His vehicle was reportedly taken to Al-Nahda Square and set alight.

Altercations were also reported elsewhere in the city, including at a Brotherhood march to the Republican Guard headquarters. Al-Ahram mentioned that clashes had also broken out overnight between Brotherhood supporters and local residents of Shubra, although there were no reported casualties.

The Ministry of the Interior released a further statement in which they reported that a total of 404 arrests had been made in relation to the clashes, on charges ranging from firearms offences to possession of molotov cocktails. The cases of those arrested have been handed over to the prosecution.

Chief Prosecutor Mohammed Abou Heta has ordered an investigation into Monday night’s events, state-owned Al-Ahram reported, amidst reports that a police station in Ramses Square had been set ablaze by demonstrators, and aMetro Station close to Rabaa Al-Adaweya had been vandalised.

On Tuesday, members of the public outside the Ramses police station claimedthat there had been a fire there the previous night, but Hossam El-Sharawy, a lawyer working in the building, said that he had been in his office throughout the day on Tuesday and had seen “no evidence of a fire”. The police station appeared to be operating normally as of Tuesday afternoon.

The latest clashes in Cairo come after a period of relative calm in the capital, following the clashes outside the Republican Guard headquarters last Monday, in which over 50 people were killed. The anti-military rhetoric from pro-Mosi supporters has been matched by anti-Brotherhood rhetoric, with both sides calling for “million man” marches and demonstrations. The clashes also coincide with a visit by William Burns, the American Deputy Secretary of State, in which he called for an end to violence.

With additional reporting from Aaron Rose