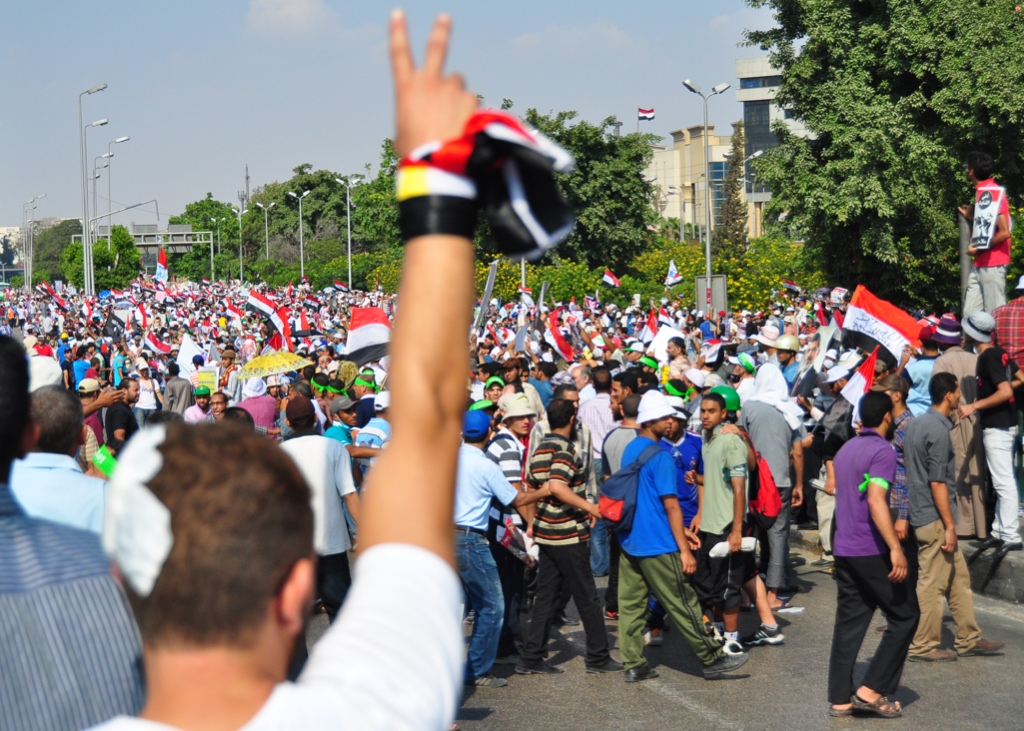 By Charlie Miller and Basil El-Dabh

Over 30 marches were organised by the Muslim Brotherhood on Friday, the 10th day of Ramadan, which also marks the fortieth anniversary of the October War. The marches, scheduled after Friday prayers, attracted Morsi supporters in the thousands who marched across Cairo to converge at El-Nahda Square, close to Cairo University, and Rabaa Al-Adaweya in Nasr City.

In Mohandessin, supporters gathered outside Mustafa Mahmoud mosque on Game’t Al-Dowal Street, and proceeded towards El-Nahda Square where a sit-in has been on-going to show support for the ousted president.

The march swelled as protesters moved slowly down Giza Street in Dokki, where the military had blocked entrances to side streets around the Giza Security Directorate, and had placed heightened security around the Saudi Arabian Embassy.

The reaction to the security forces from within the march was mixed. An elderly man kissed a senior police officer on both cheeks, whereas chants of ‘Thugs! Thugs!’ erupted as marchers passed a group of junior police officers holding the line.

The march stopped close to Giza Zoo, where the thousands of men, women and children began to filter into El-Nahda Square, passing through a concrete checkpoint staffed by Brotherhood supporters. Holding placards and pictures of Morsi, demonstrators let off fireworks and chanted ‘God is great!’

A large banner proclaiming ‘No to the bloody coup’ hung at the entrance to the Square, and stones had been arranged to say ‘Down with the military’. A young protester busied himself daubing the phrase ‘Anti-Coup’ in large white letters on the road.

Another young protester, clutching a mask of the ousted president, claimed he had been staying in El-Nahda Square following Monday’s “million man” march. Demonstrators gathered for afternoon prayers, which were followed by further chants of ‘God is great’ and calls for Commander-in-Chief of the Armed Forces Abdel Fattah Al-Sisi to ‘Get out!’

The march to Rabaa Al-Adaweya was blocked by military personnel on Salah Salem Street, close to the Republican Guard Headquarters. Demonstrators chanted slogans against General Al-Sisi, and in support of Morsi.

“The country has been stolen and those responsible are currently taking everything the country has”, a protester who had joined a march from the Abbassiya district of Cairo said. “They stole legitimacy from Morsi. We elected him and the people are coming out now to remind Al-Sisi of that.”

“I believe in democracy,” said Mohamed Abdel Hamid, a protester on Salah Salem Street, who said he had travelled from Alexandria the night before to join the Friday demonstrations. “We demand that President Morsi be reinstated because if he isn’t, then this country will never see true democracy.”

Despite their close proximity, the situation between demonstrators and soldiers on Salah Salem remained calm as iftar approached. Whilst some marchers turned around to find an alternate route to Rabaa Al-Adaweya, thousands remained on the main Heliopolis road into Friday evening.