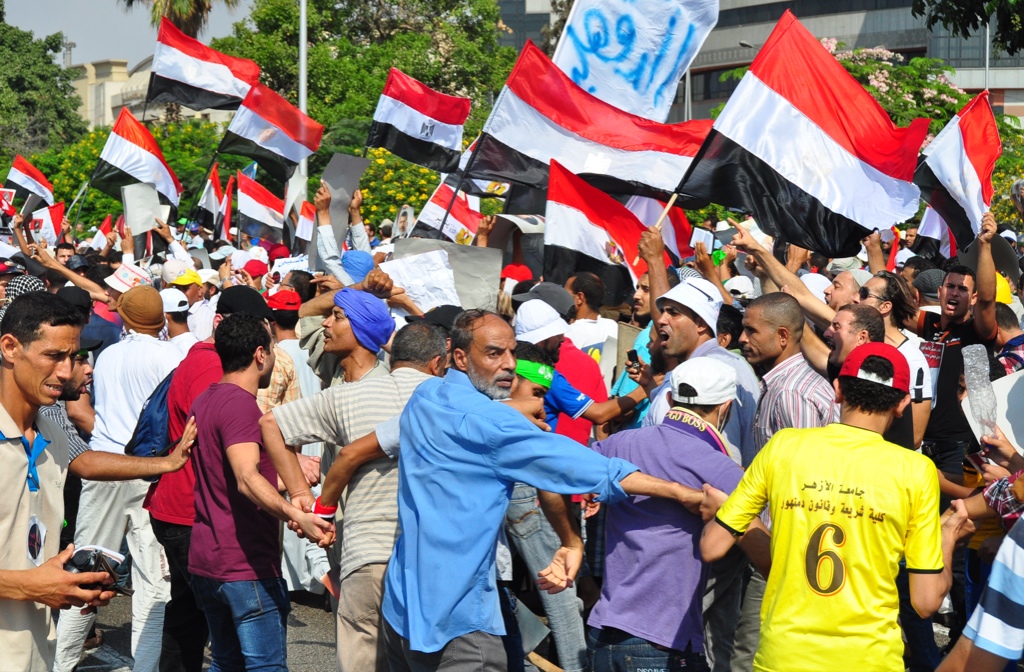 Hundreds of thousands of pro-Morsi protesters brought the streets of Cairo to a halt on Friday; over 30 marches were planned across the country in a day of protest, dubbed “People demand the end of the coup.”

Dozens of soldiers and military vehicles were deployed in several areas across Egypt to block the marches, which started after Friday prayers.

Major marches departed from Heliopolis and Abbassiya, with meeting points at the Al-Nour and Al-Rahman Al-Raheem mosques. The marches convened near Al-Tayaran Street and proceeded on Salah Salem Street, where the army had been deployed in front of the Republican Guards headquarters.

By 4pm, thousands of protesters from the Rabaa Al-Adaweya sit-in had joined those standing face to face with the army in Salah Salem Street.

Protesters chanted “Peaceful!” and “The army is ours, Al-Sisi is not ours!” as they gathered in front of the soldiers. The human shield formed by the organisers was eventually pushed closer to the Republican Guards headquarters as more crowded in front of the building.

Although most protesters said they would not hold a sit-in at Salah Salem, many expressed anger at the army for blocking their route, claiming that they had aimed to march to Rabaa peacefully.

“We did not intend to protest in front of the Republican Guards headquarters, we would have left if they had not blocked the road,” said Ahmed Ibrahim, a protester.

Marchers said there is no way out of the current political deadlock but the reinstatement of former president Mohamed Morsi and the Shura Council. Many suggested that a referendum would be an acceptable solution on the condition that Morsi announce it as a presidential decision.

“We are not leaving before we bring Morsi back because he represents the democratic process that the country participated in,” marcher Mahmoud Nasr said. “It is up to him to announce a referendum.”

Essam Abdelrazik, another protester, said that the solution lies in negotiating with Morsi on what is to happen next. “If the government wants to break this deadlock, they should negotiate with the elected president, and what he says goes,” he said.

“He who carries out a coup can also rig the elections,” Karam Fayez, one protester, said to the cheers of several protesters surrounding him.

Protesters have reiterated that they are not afraid of potential violence and loss of life that may result from this political battle;  many said they are certain of victory, because they are armed with faith in God and conviction.

“We would rather bring it down on  our heads and theirs in our fight to defend democracy,” Noha Hamid said. “I am here to fight to have a country where my vote will be respected, and I will not leave before we succeed.”