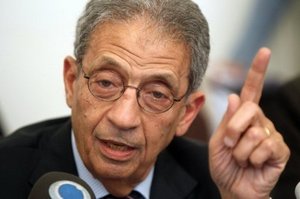 Amr Moussa announced his resignation on Sunday as head of the Conference Party and appointed Ambassador Mohamed El-Oraby, a former minister of foreign affairs, as his replacement.

“He felt that at this time and due to the changes on the Egyptian political scene the power should be transferred to the youth, a younger generation,” said Lamia Kamel, Moussa’s media advisor.

Kamel also stressed that Moussa, a former secretary general of the Arab League, will continue being part of the political scene and part of the National Salvation Front and will remain an “honorary head of the Conference Party.”

On Saturday night the party’s general assembly met and nominated Mohamed El-Oraby to replace Moussa, who met with the party’s political bureau and officially appointed El-Oraby as the new head of the party.

The former head stressed on the importance of national reconciliation and unity during Egypt’s current transitional period, according to a statement by the party.

Moussa founded the Conference Party in 2012 to “balance out the power of the Islamists and other political wings on the political scene,” as described by Kamel.