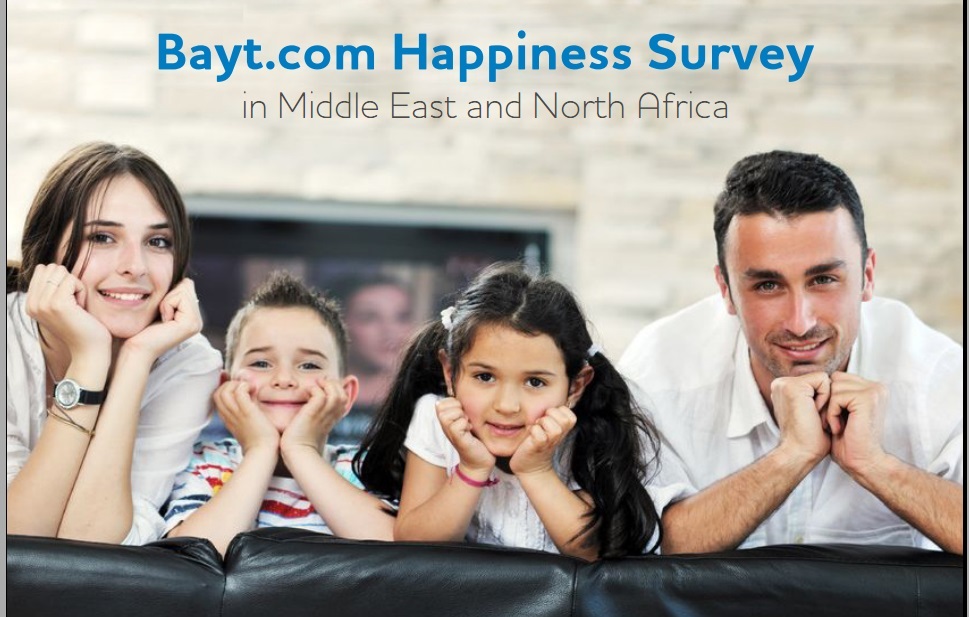 The Happiness and Wellbeing in the MENA survey conducted by Bayt.com, the Middle East’s number one job site, and YouGov, an independent research and consulting organisation, has revealed that respondents in Egypt are satisfied with life in general, although increasing cost of living and lack of political stability are major sources of dissatisfaction and stress. The top reasons for satisfaction are mental wellbeing (62%), relationship with family (49%), and independence to take one’s own decisions (44%).

How happy are people in the Middle East?

With regards to their personal life, respondents from the MENA region are generally satisfied with their current mental and physical health. In fact, 75% claim they are in good overall health, and around half of the respondents say that they are “extremely satisfied” with the current relationship they have with their family.

On the other hand, the highest dissatisfaction noted by respondents is with financial independence across all three regions (GCC, Levant, and North Africa).  People in the MENA are also not too satisfied with their professional lives, with 45% of respondents across the region claiming they are somewhat dissatisfied with the remuneration they receive. There is also a sentiment that in general, there are not too many opportunities for career advancement (this is particularly seen in Syria, Jordan, Algeria and Morocco). Overall current job satisfaction is generally low across the region, with Morocco having the lowest. Only 15% of respondents claim they are “extremely satisfied” with their current work/life balance. When asked about current levels of stress that they have in their everyday life, 4 in 10 respondents claim they are “somewhat stressed”, with the key contributors to stress being the increasing cost of living and current economic situation of the country.

“For life satisfaction, it is pretty clear that employment is an extremely important factor. Stress is a prevalent issue across the region, which is likely reflective of the uncertain economic situation experienced in many MENA countries. Despite the fact that many professionals seem to be afflicted with stress-related ailments, there seems to be a general sense of happiness with the overall state of life,” said Suhail Masri, VP of Sales at Bayt.com. “At Bayt.com, we specialise in empowering job seekers and employers by providing them with the information that makes a difference to their career and everyday lives.”

The general state of the country of residence is also seen to highly affect happiness in the MENA. GCC respondents have much higher levels of satisfaction on most attributes seen as key to happiness aside from cost of living and overall employment opportunities.  Respondents in North Africa express high dissatisfaction with the availability of key aspects such as general infrastructure, public transport facilities, opportunities to socialise and entertainment avenues. In the Levant, respondents from Jordan express satisfaction with most aspects measured, contrasting strongly with high dissatisfaction in Lebanon and Syria. Across the Middle East, employment opportunities and cost of living are the two elements that respondents say they are least satisfied with, in their country of residence.

“Happiness differs greatly on different factors when we’re comparing the three main regions in the MENA: North Africa, Levant, and the GCC. The survey reveals Egypt as generally satisfied. This satisfaction can be attributed to the fact that the social structure is supportive of maintaining relationships, which then reflects on a positive attitude on most other fronts.” said Sundip Chahal, CEO of YouGov.

In Egypt, 59% of the survey population assert they are satisfied with their life in general, of whom 15% indicate that they are “extremely satisfied”. People in Egypt are among the happiest in the region when it comes to factors related to personal elements. For Egyptians, the factors that contribute to satisfaction in personal life include mental wellbeing, relationship with family, independence to take one’s own decisions, support received from family, freedom of expression and freedom to socialise. Interestingly, 20% of respondents in Egypt claim to be “extremely satisfied” with their current standard of living, which is the highest top satisfaction rate in the region along with Oman, which also has a 20% incidence of residents who consider themselves “extremely satisfied” with their standard of living. Overall, satisfaction with physical health rates was moderate among respondents in Egypt, with 44% claiming to be “extremely satisfied” – a little above the MENA average of 43%.

Data for the Bayt.com’s Happiness and Wellbeing in the MENA survey was collected online from 6 to 20 June, with 11,170 respondents aged 21 and above, representing Algeria, Bahrain, Egypt, Jordan, Kuwait, Lebanon, Morocco, Oman, Pakistan, Qatar, Saudi Arabia, Syria, Tunisia and the UAE.