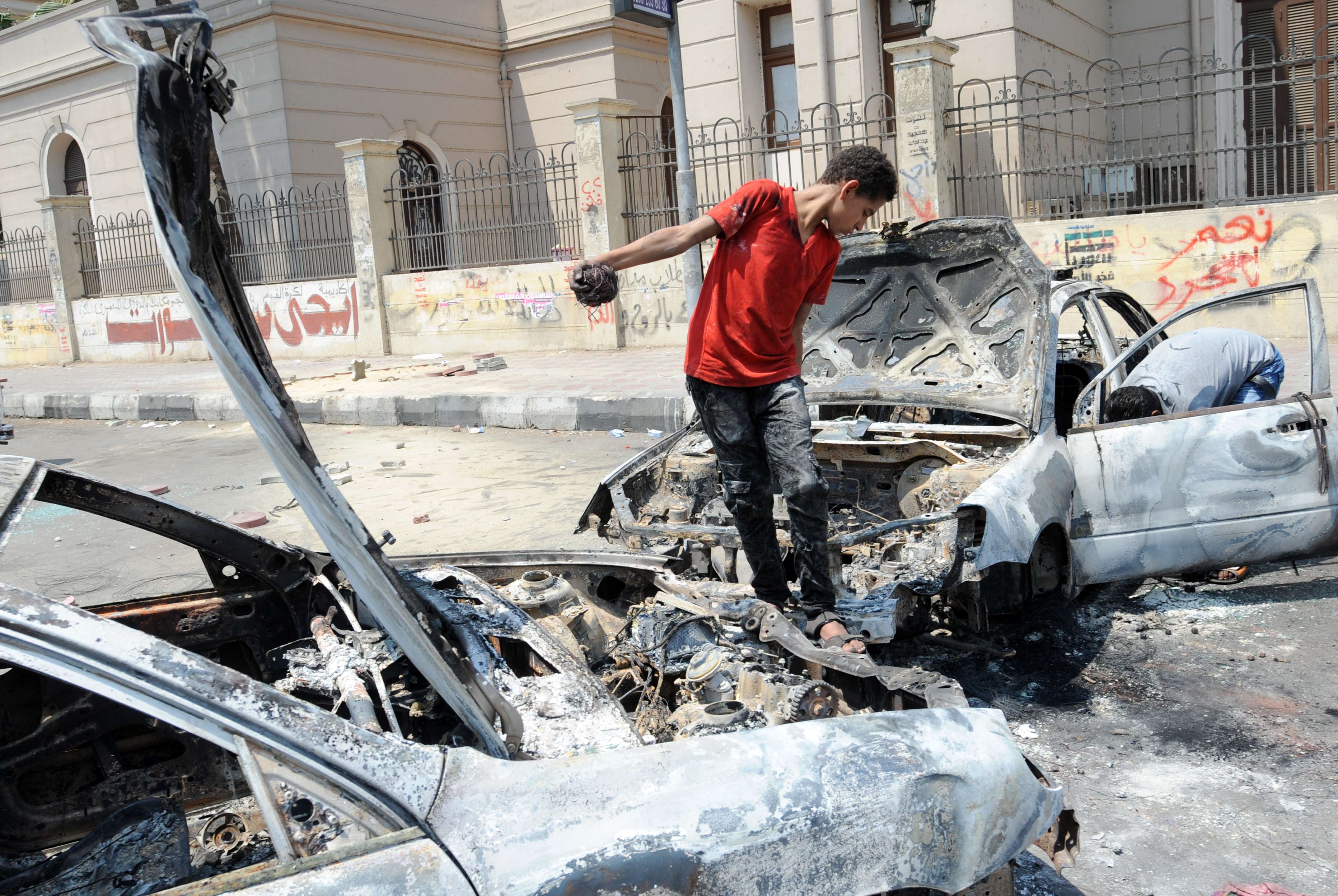 Nine people were killed and 86 injured in clashes in Cairo, Giza and Qaliubiya on Monday night and Tuesday morning.

The Muslim Brotherhood released a statement on their website claiming that police officers started shooting at protesters in Rabaa Al-Adaweya at 3 am, and that police also attacked the sit-in at Al-Nahda Square.

The statement denied claims that protesters at Rabaa Al-Adaweya had detained police officers.

The protesters announced in the statement that they would continue protesting peacefully, adding that “any attempt to evacuate Rabaa Al-Adaweya under any excuse will be the direct responsibility of leaders of the coup, particularly General Abdel Fatah Al-Sisi and the Minister of Interior Mohamed Ibrahim.”

Khaled Al-Khatib, head of the central administration for urgent and critical care in the Ministry of Health, announced in a press conference on Tuesday morning that there were nine injured in clashes in Rabaa Al-Adaweya and in Tahrir Square, according to state-owned Al-Ahram.

However a field hospital in Rabaa Al-Adaweya claimed there were 22 injured in clashes there on Tuesday morning alone, according to Aswat Masriya.

In Al-Nahda Square near Cairo University six died and 33 were injured in clashes early on Tuesday, Al-Khatib said.

Among the victims was a child, who died from a bullet in the head, reported Al-Ahram.

The clashes broke out after a pro-Morsi march attempted to disrupt traffic and attack vendors, according to MENA.

On Monday three died and 44 were injured in clashes in Tahrir Square and in the city of Qalioub, in the governorate of Qaliubiya, according to Al-Khatib.

In a statement released Tuesday morning, the National Coalition for Legitimacy denied pro-Morsi protesters intended to head to Tahrir Square, explaining that the march, which started in front of the High Court, was headed towards the United States Embassy via Galaa Street and the Corniche.

The statement read: “Police forces along with thugs, who came out from police tanks, attacked the protesters with tear gas, birdshot and live ammunition after surrounding the protesters in a narrow street near the American Embassy.”

The statement said the injured were taken to the Al-Nahda Square field hospital.

The National Salvation Front (NSF) condemned the violence in a statement on Tuesday: “The National Salvation Front condemns the continuation of Muslim Brotherhood supporters attacking peaceful protesters in Tahrir Square in Cairo, Alexandria, Qaliubiya and other cities over the last three weeks without legally pursuing them and their leaders for their involvement in such attacks.”

The NSF called the Ministry of Interior and security forces to protect peaceful protesters and prevent violence.

The NSF also announced that it supported the people’s rights to express their opinions freely, adding that the Brotherhood’s actions “do not have anything to do with people’s right for freedom of expression, but falls under crimes that need to be investigated.”

Leftist political group Al-Tayar Al-Sha’aby extended its condolences to the families of the victims of the clashes in a statement released on Tuesday.

It stressed the importance that both parties maintain peaceful protests, but blamed Brotherhood leaders for “pulling the country towards a wave of violence and chaos.”

The statement called for urgent and transparent investigations into the clashes.