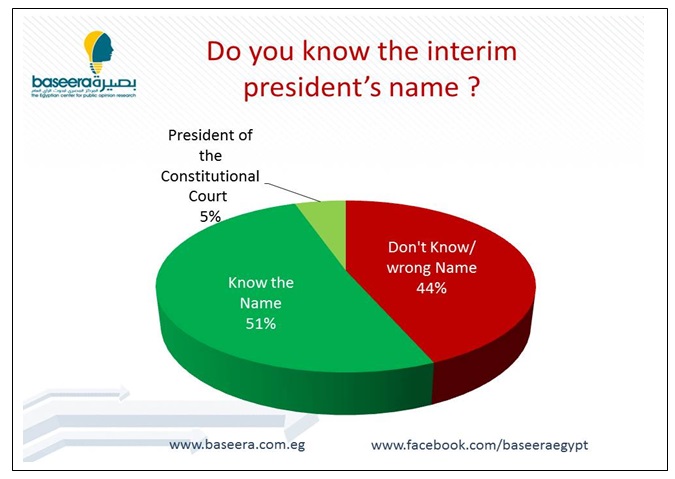 The Egyptian center for public opinion research Baseera conducted a poll on the Egyptian public’s knowledge of the new president’s name, the prime minister’s name and their opinions about appointing El-Beblawi as prime minister and ElBaredei as vice president.

The poll results show that 51% know the interim president’s name and mentioned it correctly and 5% don’t know his name but know that he was the President of the Supreme Constitutional Court while 44% said they don’t know the name or mentioned a wrong name.

Around 27% see that choosing Mohamed ElBaradei as vice president is a good choice while 15% consider it an average choice and 30% consider it a bad choice. Around 28% said that they are unsure about that choice. The percentage of those who consider ElBaradei a good choice increases from 24% among those with less than intermediate education to 41% among university graduates.

The poll was conducted using landline and mobile telephones on a sample size of 2214 ages 18 or older nationwide. All interviews were conducted on 20 and 21 of July. The response rate was approximately 68%, while the results’ margin of error is less than 3%.