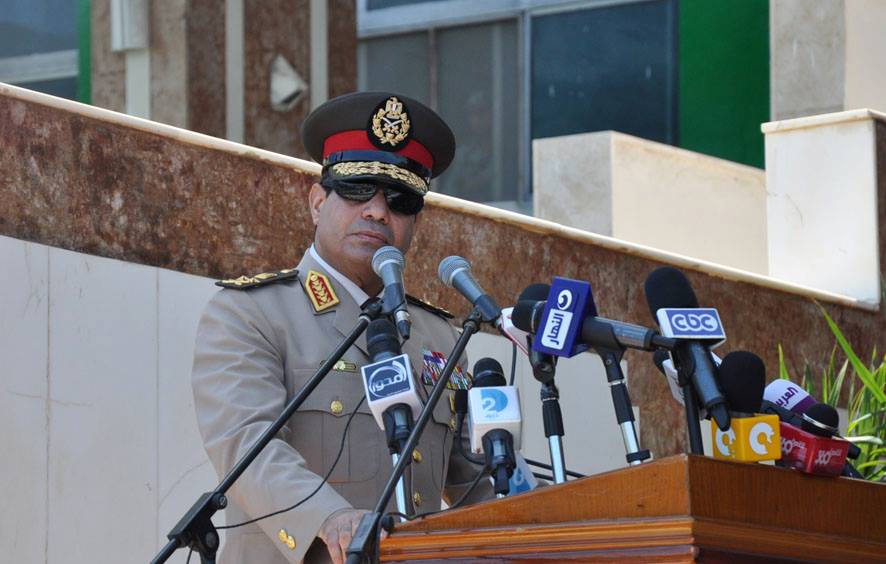 Minister of Defence Abdul Fatah Al-Sisi has called on Egyptians to take to the streets on Friday to authorise the army to “confront violence and terrorism.”

The remarks came during a Wednesday speech at the graduation ceremony of two classes of the Naval Academy and Air Defence, calling on the people to reject violence and support reconciliation efforts and transitional justice.

“Whoever thinks we can go back on the roadmap we agreed upon is wrong,” Al-Sisi said, adding that the country was preparing for elections that would be supervised by the whole world.

Al-Sisi denied having betrayed former president Mohamed Morsi, saying he informed Morsi that “the army belongs to all Egyptians and is under your command according to the legitimacy that the people provided you with.”

He went on to describe a meeting he had held with two Muslim Brotherhood leaders prior to the president’s speech at the conference centre in Nasr City in June, where he says he told the leaders that the situation was “dangerous” and reconciliation with all institutions and groups was necessary. The two leaders, he said, replied that “armed groups” would be ready to solve any problem that arose, which Al-Sisi says he immediately denounced.

“The next day I met former president Morsi for two hours and we agreed on the terms and vocabulary for reconciliation,” the defence minister said. “Then I sat at the conference centre and was shocked by his speech.”

“I tried to convey to the former president the situation on the ground, hopeful that he would take a step before it was too late” he added.

Al-Sisi said he gave Morsi a week before 30 June to try to exit the crisis and he offered his suggestions to the former president.

“On 3 July, I sent former prime minister [Hesham Qandil], former Shura Council chairman [Ahmed Fahmy] and Selim Al-Awa to former president Morsi to convince him to be proactive and call for a referendum on his remaining in power… his answer was no,” he said.

Al-Sisi said he had told Morsi: “political pride dictates that if the people reject you, you should either step down, or re-establish confidence through a referendum.”

“Some people want to either rule the country or destroy it,” he added.

Al-Sisi said since he was appointed defence minister, the political dispute has been “grave”, representing a threat to national security, he suggested inviting political groups to a national dialogue and Morsi agreed.

“The next day I called Morsi and he told me to cancel the invitation,” he said.

Al-Sisi said he had previously called on politicians belonging to the Islamist current to uphold the notion of the state.

“The source of legitimacy is the people; the ballot box is a means for legitimacy,” he said. “If there was any other way than taking to the streets to reject the president’s legitimacy, the people would have taken it.”

At the end of his speech, Al-Sisi thanked military and police personnel for their efforts during the transitional period. “We will meet with all Egyptians on Friday,” he said, “where the army and the police will secure all protests in all governorates.”